'#ICouldBe' hashtag celebrates the potential of children with Down Syndrome

Social media is awash with posts celebrating this year's World Down Syndrome Day.

Hashtags 'ShareTheJourney', 'ICouldBe', and 'LeaveNoOneBehind' have dominated Twitter and Facebook today as people across the country raise awareness for Down Syndrome and challenge misconceptions about those who have it.

Many people have also opted to wear odd socks to mark the extra chromosome that people with Down Syndrome are born with.

Down Syndrome Ireland are using the day to challenge the outdated ideas about the genetic disorder while also promoting the reality of living with Down Syndrome in this country.

The charity encouraged supporters to use social media to raise awareness of Down Syndrome and to celebrate those living with trisomy, the triplication of the 21st chromosome.

Our '...more than medical' book launch event is about to start - we welcome Minister @FinianMcGrathTD and all our guests 💜#ShareTheJourney #LeaveNoOneBehind #WorldDownSyndromeDay pic.twitter.com/KLinaAbZwA

Speaking on Morning Ireland today, Down Syndrome Ireland CEO Gary Owens encouraged people to challenge their attitudes towards children with Down Syndrome specifically.

He said that there is now more access to speech and occupational therapy to help young people with the genetic disorder access mainstream education and, later in life, employment opportunities.

The Down Syndrome Centre have also contributed to today's celebration by launching their new campaign 'I Could Be.'

It’s busy at the ticket office in Connolly but we have some great help today #ICouldBe #WDSD2019 @Downsyndromecen pic.twitter.com/54vGld2i2T 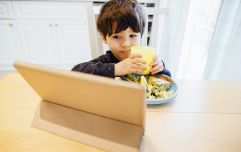 END_OF_DOCUMENT_TOKEN_TO_BE_REPLACED

Featuring the faces of 18 children with Down Syndrome, the photos are displayed around Dublin city centre today alongside professions that each of the kids, aged between six and 16, could be in the future.

These included a politician, a TV presenter, a model, a fashion designer, and a chef.

Happy World Down Syndrome day from 8 year old Leah Murray, who helped us out as a tour guide here in Dublin Castle! Thanks, Leah! @Downsyndromecen     @WorldDSDay  #ICouldBe    #WDSD2019
@downsyndromecentre pic.twitter.com/OUTJZjLns9

Today is #WDSD2019. We had Josh in the Gaiety as part of the #ICouldBe campaign. He is 15 and wants to be an actor. @Downsyndromecen @WorldDSDay pic.twitter.com/cfwZiXF0eu

#ICouldBe playing for my club in the RDS or in the Aviva... On #WDSD2019 we salute all our wonderful players and their clubs and the brilliant work of our charity partners @Downsyndromecen and all the support they give to children with Down syndrome and their families 👏💪🏉 pic.twitter.com/H7y96WMjl7

It was great to have Ben in here last week as he expertly conducted his brothers. Today he's looking after our foyer for us. If you're passing, pop in for a look to support #WorldDownSyndromeDay !@Downsyndromecen @WorldDSDay

"An important part of ‘I Could Be’ was for each of the children to spend some time with each of the businesses and organisations that are supporting the campaign," said the centre.

"This turned out to be a lot of fun for all involved."

You can find each of the children's locations by clicking here.


popular
Opinion: All schools should have generic school uniforms
You can now choose who can and can't see you're online on WhatsApp
Archie Battersbee's mother issues warning about TikTok challenges
Ekin-Su and Davide taking their mums to New York with Love Island winnings
Irish people could be treated to spectacular sights in the sky over the next few nights
London with kids? 5 great places to cool down on a hot summer day
Baby twins die in hot car after dad forgets to drop them to creche

You may also like
20 hours ago
Opinion: All schools should have generic school uniforms
23 hours ago
14 gorgeous baby names inspired by locations all over the world
1 day ago
Met Éireann extends high temperature warning for Ireland this weekend
1 day ago
Forget about ultra cheap Ryanair flights for the foreseeable future, O'Leary warns
1 day ago
TikTok star shows how to avoid sweat stains by using pantyliners
1 day ago
An Emily in Paris themed reality show is in the works
Next Page