We are wishing her a speedy recovery.

An 11-year-old girl has been rescued on Bere Island off the west Cork coast after she was injured in a fall.

Castletownbere RNLI lifeboat was called to the scene after receiving a call on Saturday and departed shortly after 10 pm.

Valentia Coastguard Marine Coordination Centre had requested the crew to give assistance to the girl in Rerrin at the eastern end of the island.

While there were calm conditions noted at the time, due to tidal conditions on Bere Island, the lifeboat was unable to berth and the inflatable Y-boat was launched.

The young girl was then transferred by stretcher to the lifeboat, accompanied by her mum. 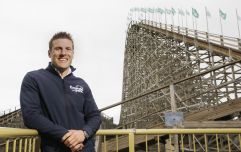 END_OF_DOCUMENT_TOKEN_TO_BE_REPLACED

She was then met with paramedics at Castletownbere RNLI Station from the National Ambulance Service where she received a medical assessment and attention.

According to the Irish Mirror, Castletownbere RNLI Lifeboat launching authority Felix O’Donoghue said: “Thankfully, this was a very straightforward call out and everything went very smoothly – we wish the girl a full and speedy recovery.”