Gardaí are warning the public of a return of a scam which has cost victims thousands of euros.

"We see it all the time," Sergeant Kelly said.

"We saw another one the other day, the 'Hi Mum' text.

"They thought it was their son or daughter that was contacting them, that they needed cash put into an account and gave an account number.

"There was a couple of grand paid over.

"It's not the first time that we've seen it."

Kelly encouraged the public to stay vigilant and to share the information of the scam among friend groups and peers. 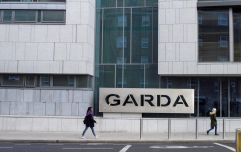 END_OF_DOCUMENT_TOKEN_TO_BE_REPLACED

"The more people that we can get the information to, get them talking, and it will prevent a lot of it from happening."

Last week, Gardaí warned the public of a bank card scam that was uncovered via an undercover sting.

A woman missed a phone call from a number that appeared to be the same as her bank's card department.

As it turns out, the fraudsters in question had managed to replicate the phone number. On a second attempt, the woman answered and was told that the bank cards in her possession were compromised. She was then told to place her bank cards into an envelope for collection by a courier.

During this exchange, the woman's son overheard the conversation. Suspicious, he opted to contact the local Garda Station. A taxi driver subsequently collected the envelope, whereupon he transported them, via plain-clothes Garda escort, to a man outside of the bank branch in Midleton.

In time, Gardaí approached the individual outside the bank, discovering that he was in possession of several bank cards.

popular
Third child dies from scarlet fever in UK- here are the symptoms to look out for
"My heart sank": Tubridy hit with backlash over Toy Show remark
Parents told to stop buying selection boxes for kids- here's why
Having an Elf on the Shelf can actually be bad for your kids
Downton Abbey's Jessica Brown Findlay welcomes twins after IVF struggle
Elf on the Shelf is actually pretty bad for your kids, according to an expert
Mysterious clumps in Christmas tree should be removed immediately
You may also like
5 days ago
"Enhanced x-ray technology" being trailled at Dublin Airport could lead to removal of 100ml liquid rule
1 week ago
Employment lawyer and TikTok star Richard Grogan has sadly died
1 week ago
Government to introduce two new regulations for e-cigarettes
2 weeks ago
Calls to remove 'inhumane' 12-week limit on abortion services in Ireland
2 weeks ago
Status Yellow warning issued with heavy rain and wind on the way
2 weeks ago
"Extraordinary courage and integrity" – Micheál Martin leads tributes to Vicky Phelan
Next Page