Authorities have officially declared a suspect.

Prosecutors in Portugal have officially declared a formal suspect in the ongoing Madeleine McCann case.

The suspect understood to be a German man, has not been named.

According to BBC News, Portuguese officials referred to the individual as an "arguido" – which translates as 'named suspect' or 'person of interest' – while acting on the request of German authorities.

In 2020, 44-year-old Christian Brueckner was named as the prime suspect in the case looking into McCann's 2007 disappearance, with German prosecutors reportedly "100% convinced" he is the man responsible.

Earlier this year, he released a statement from prison proclaiming his innocence in relation to the McCann case.

He has not been charged in connection with McCann's disappearance and has continued to deny any involvement.

Next month will mark 15 years since the three-year-old vanished during a family holiday in Praia da Luz. 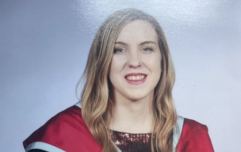 END_OF_DOCUMENT_TOKEN_TO_BE_REPLACED

Operation Grange, the inquiry into McCann's status that has been estimated to have cost almost €15 million to date, is set to draw to a close later this year.

Speaking to BBC Breakfast, former policeman Jim Gamble, who worked on a 2010 review of the case, said he is praying for a resolution to the matter.

"What her family have gone through with the loss of Madeleine - with what they've had to suffer with some of the idiots on social media, which hasn't made things easier for them - has been horrendous," said Gamble.

"I hope and I pray, like everybody else that has been touched by this case, that we're coming to the end.

"It would just be fantastic to be able to give the McCann's peace of mind so far as knowing exactly what happened."

popular
Babies born in February have some pretty cool advantages – no, really – it's true
11 of the best fun playgrounds in Dublin
'He's a changed man': Woman marries her 'high school bully'
'Vile' TikToker blasted for comparing disabled kids to vegetables
26 Amazing Irish Glamping Sites for Your Family Staycation
Entrepreneur schoolboy has made £1,000 from selling sweets
We have St. Brigid to thank for our new bank holiday, but who exactly was she?
You may also like
1 day ago
These 40 baby names are set to trend in 2023
1 day ago
Viewers believe Bluey is a rainbow baby- check out the theory
2 days ago
Parents believe CoComelon causes tantrums and speech delays in toddlers
2 days ago
Police believe they know what happened to missing dog walker Nicola Bulley
2 days ago
Bringing a dog to work can increase morale and productivity, says DSPCA
3 days ago
Toddlers are happier with fewer toys, study finds
Next Page