Yikes – he didn't hold back.

The Queen's Platinum Jubilée took place in the UK a couple of weeks ago, celebrating Queen Elizabeth's 70 years on the throne.

In attendance was the entire royal family, from senior royals like the Duke and Duchess of Cambridge with their three children, to the Queen's grandchildren Eugenie, Beatrice and Zara, alongside their husbands and kids.

And despite stepping down as senior royals a couple of years ago, Prince Harry and Meghan Markle had also made the trip from their California home alongside their two kids, Archie and Lilibeth.

However, it was not all one big family reunion as it would happen, as things continue to be rather frosty between Harry and Meghan and other members of the royal family following the Sussexes explosive Oprah Winfrey interview.

Former England rugby star Mike Tindall is married to Zara, the Queen's granddaughter, and the couple, who are parents to three young children, were in attendance for the entire jubilée.

Mike is known to be good friends with Prince William, but it seems, when it comes to Prince Harry, things are a little less pleasant.

During a party at Buckingham Palance, MMike was overheard referring to the Duke of Sussex as 'b***end' a source has confirmed to the Express.

The rugby personality allegedly used the derogatory term to describe Prince Harry when asked how he felt about the Sussexes returning to London for the celebrations. 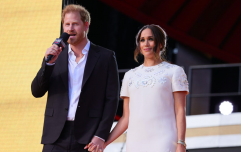 END_OF_DOCUMENT_TOKEN_TO_BE_REPLACED

Both Harry and Mike were in attendance with their wives at the St Paul’s Cathedral thanksgiving service on June 3 alongside top royal names.

After the service, sources claim the Duke and Duchess of Sussex had approached the Tindalls, but according to the Express, Mike deliberately avoided speaking to the controversial royal pair and instead stared into the distance.

Body language expert Judi James told the outlet that his closeness to Prince William may have made the meeting awkward, and revealed to the newspaper that after having had a turbulent relationship with his younger brother in the past years, William has struck up a bond with his cousins' husband.

James claimed: “Zara looks happy to chat and even turns fully to talk to Harry here, who is looking anxious and keen to get into his own car."

“Mike though remains facing forward, looking about and holding his order of service up with a look of awkwardness. In the end he talks to Viscount Lindley, who turns his own back on Harry, cutting the two men off from Zara’s conversation with Harry.”

It isn’t the first time Tindall has allegedly expressed his annoyance with the Duke - during A Question of Sport Live at the London Palladium, he joked the royal family would like to “throw a few punches” in his direction.


popular
Parent's Benefit Leave extended from today - here's what you need to know
I tried 'slow parenting' for a year and I'm never going back
6 fun things to do in Dublin on your next family day out
Children wearing wrong-sized shoes and pyjamas in daytime as parents cut costs
Ireland's first Lego store in Dublin announce that it will be opening next month
Lidl announces warehouse clearance sales with 80% off
"You're disgusting": Prince William roars at photographer who was 'stalking' his family
You may also like
1 week ago
Meghan Markle goes "out of her way" to support families of Texas school shooting victims
2 weeks ago
Prince William and Kate made no efforts to introduce their kids to Harry's family
3 weeks ago
Harry and Meghan release brand new picture of Lilibet to mark 1st birthday
4 weeks ago
Prince Harry and Meghan introduce Lilibet to Queen Elizabeth for the first time
4 weeks ago
Prince Harry and Meghan reunite with royals for Jubilee celebrations
1 month ago
Prince William and Kate are skipping Lilibet's 1st birthday party
Next Page