The Prince and Princess of Wales visited Northern Ireland for the first time since Queen Elizabeth's death today.

The royals were mostly welcomed by the public during their brief trip, but one woman confronted Kate Middleton this afternoon.

During a walkabout, the mum-of-three was greeting members of the public. Kate reached out to shake one woman's hand and as she shook her hand the woman said to her, "Nice to meet you but it would be better if you were in your own country".

According to Metro, the woman then told Kate, "Ireland belongs to the Irish".

Kate Middleton was told 'Ireland belongs to the Irish' by a member of the public during a visit to Belfast 👀 pic.twitter.com/wH5jntiODY

The Princess of Wales reportedly laughed off the encounter and walked away from the woman. She continued to greet members of the public in Carrickfergus, Belfast this afternoon. 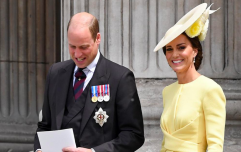 Apparently, Kate and Will were warned against having more children

END_OF_DOCUMENT_TOKEN_TO_BE_REPLACED

During their visit to Belfast, the Prince and Princess of Wales met the staff at Carrick Connect.

The royals praised the team for supporting youths in the area.

"The volunteers and team behind Carrick Connect certainly give their ‘Feel Good Hub’ its name – supporting children and young people in the community with social or emotional difficulties."

They added, "Keep up the amazing work!"

This visit marked Kate and William's first trip to Northern Ireland as the Prince and Princess of Wales.

popular
Opinion: He may be a politician, but Leo Varadkar's personal life is none of our business
Parents told to stop buying selection boxes for kids- here's why
People are realising what the red Christmas lights are actually for
Woman gives birth to baby boy and girl less than 12 months apart
Expert says Cocomelon acts "as a drug" to kids' brains
Elf on the Shelf is actually pretty bad for your kids, according to an expert
This Netflix Christmas film is being dubbed the perfect rom-com
You may also like
1 month ago
Kate Middleton isn't worried about The Crown because of her perfect image
1 month ago
Princess of Wales reveals she struggled to name her children
2 months ago
Kate Middleton reveals Prince Louis' sweet words about Queen Elizabeth's passing
3 months ago
Prince William and Kate move children to new private school
3 months ago
Prince William and Kate's kids won't have a live-in nanny for the first time in their lives
3 months ago
William and Kate send letter to girl who invited Prince George to his birthday
Next Page