He will face a hearing in March.

A youth who allegedly knocked a girl “head first” under a Dart train and “nonchalantly” walked away is set to face trial in the Dublin Circuit Criminal Court, The Irish Examiner reports.

On April 1 2021, CCTV footage emerged of a 17-year-old girl being pushed onto the train tracks at Howth Junction between the platform and a stationary Dart.

Three teens were charged in relation to the incident, with one of them facing an additional charge for assault by causing harm to the girl. He faced a preliminary hearing at the Dublin Children's Court in December 2021.

Judge Paul Kelly watched the video footage and heard an outline of the allegations from Garda.

He said that boy's case was too serious to stay in the Children's Court.

The teenager appeared in court again on Tuesday  to be served with a book of evidence and was told by Judge Kelly he would be sent forward to the Dublin Circuit Criminal Court for a hearing in March.

In December, the Children's Court heard that 10 –15 youths had been "shouting and roaring", causing a disturbance on a train. 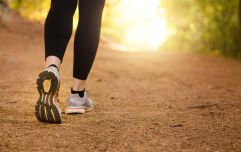 Gardaí launch investigation after woman is attacked during morning walk

END_OF_DOCUMENT_TOKEN_TO_BE_REPLACED

Footage showed six girls running onto the platform to catch the Dart. The then 16-year-old boy appeared to use the handlebars of his bike to lunge at one of the girls, striking her knee and causing her to fall.

The girl was thankfully pulled free from the tracks by a security guard and passer-bys before the train began moving. She had several injuries and was visibly shocked and distressed by what had happened.

Garda said the girl had found it difficult to go to school since the incident and would spend "most of her day in the toilet crying".

The two other youths charged will remain in the Children's Court and face a hearing in May.


popular
Meghan Markle visits Texas school shooting memorial
Doctor warns women not to follow Kourtney Kardashian's fertility advice
The reason why mums wake up when babies cry and dads stay asleep is interesting
"Back where she belongs": Saoirse Ruane leaves hospital after 9 days
9 of the best outdoor family experiences in Ireland's Ancient East
"Get over it": Gino D'Acampo responds to backlash after kissing daughter on lips
Bridgerton star reveals she has been hospitalised with mental health issues
You may also like
1 month ago
Victim of homophobic attack in Dublin city speaks out from hospital
1 month ago
Knife-wielding man attacks teacher in West Cork
1 month ago
Gardaí launch investigation after videos of young girl being attacked emerge
2 months ago
Young woman injured in St. Patrick's Day attack in Donegal
3 months ago
Family of man injured in Sligo burglary say there's "no real hope"
3 months ago
Man in his 30s due in court over attack on woman in Stephen's Green
Next Page