UK schools could open on weekends to help pupils catch up after Covid- should Ireland do the same?

Schools could be opening up on weekends in the UK as the education board looks to catch up after the extended Covid closures.

According to The Times, new figures show between 95,000 and 135,000 children did not return to school this term - a statistic that doesn't even include regular absence numbers.

Furthermore, some schools could also test out an extended day, from 8am-6pm, in a pilot scheme after the government's spending review is announced later this month.

There are fears around both children's and teenagers' mental health following the long periods of lockdown, as well as the activities they have taken up while not in school.

Steve Chalke, founder of Oasis - England’s biggest academy trust - told The Times: "We are not just risking a lost generation. We are watching it happen." The paper also reported that headteachers will ask parents if they would like Saturday mornings for their children.

Teachers will of course be paid more for the additional teaching hours should it go ahead, with a slew of newly-hired tutors also set to be brought in to UK schools. 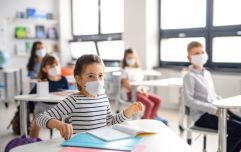 Calls for staggered re-opening of schools- do you agree?

END_OF_DOCUMENT_TOKEN_TO_BE_REPLACED

Physical health is also still a concern as it is estimated that one in 20 secondary school children are thought to have had coronavirus in the past week.

What do you think? Should Ireland introduce something similar? Or is this a step too far?

Out of all the schools in the EU, Irish schools missed the most time due to ongoing lockdowns.