Police have confirmed that a 4-year-old girl has been killed in a house explosion in south London. The young girl tragically died after a house collapsed in London at around 7 am this morning.

The explosion happened at a house on Galpin's Road in Thornton Heath, London.

Met Police stated: "London Fire Brigade attended and the body of a child, believed to be a four-year-old girl, was recovered from a building."

"Her next of kin have been informed and are being supported by specially trained officers."

"An investigation into the cause of the incident, alongside colleagues from the LFB, remains ongoing."

A girl, believed aged 4, has died following a fire and explosion at a property in Galpins Road #Mitcham. The child's family is being supported by specially trained officers.

Another three people were rescued from the house, but they have been hospitalised. Their injuries are not known at this time. 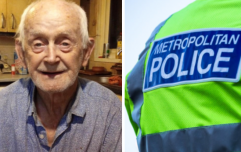 Man charged with the murder of 87-year-old Thomas O'Halloran

END_OF_DOCUMENT_TOKEN_TO_BE_REPLACED

Deputy Assistant Commissioner Richard Welch, who is at the scene, stated: "Firefighters carried out a search of the property, and sadly, a child was pronounced dead at the scene.

"Our thoughts are with their family, friends, and the local community at this time.

"The welfare of our staff involved in this incident is very important to us and all of them will be offered counselling as a priority."

Around 40 properties have been evacuated as a precaution.

Locals reported smelling gas weeks before the explosion took place. Others claimed they had felt sick and dizzy in recent days, but the cause of the explosion has not yet been confirmed.

One local told Sky News that the explosion sounded like a storm passing. The man, who lived several streets away, said he heard a "loud boom".