"Strictly has been a lifelong dream"

Strictly Come Dancing stars AJ Odudu and Kai Widdrington have unfortunately pulled out of the final.

The TV presenter had to step down because of an ankle injury.

AJ injured her foot earlier in the week and is now unable to put any weight on it, nevermind dance.

The Strictly stars are completely heartbroken, but they had to put AJ's health first.

AJ said taking part in the show was a total dream come true for her.

"I'm deeply upset that I am unable to perform in the final due to a torn ligament in my right ankle. Learning to dance over the last 13 weeks has been an incredible honour."

She added, "To do it alongside someone as special, patient, and devoted as Kai is something I'll treasure forever." 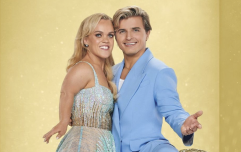 END_OF_DOCUMENT_TOKEN_TO_BE_REPLACED

She wished her fellow contestants good luck ahead of Saturday's final.

"Strictly has been a lifelong dream and I'm glad it came true.

"Good luck to my partners in dance, John & Johannes and Rose and Giovanni."

Kai praised AJ for being such a phenomenal performer from day one.

The professional dancer said dancing with AJ was an honour.

"Although neither of us wanted our journey to end this way, AJ's health and safety are by far the most important things," Kai said.

He said the presenter was the "best partner" he could have ever asked for in his first year on Strictly.

"I will always treasure the memories of dancing in the Strictly ballroom with her," Kai said.

Their time on Strictly has come to an end. However, Kai said they'll remain friends for life.

"I will be there for her through her recovery in whatever way I can, Kai added.

AJ and Kai will always be winners in our eyes.

popular
Expert says Cocomelon acts "as a drug" to kids' brains
Adam Collard responds to claims he cheated on Paige Thorne
Holly and Phillip weren't on media list for Queen's lying in state
6 unusual and unique family-friendly activities to try in Ireland's Hidden Heartlands this autumn
Princess Charlotte doesn't have to bow to the Queen but Prince George does - here's why
Amal Clooney's on a strict post-pregnancy diet and we don't fancy it
Jamie Dornan and his wife, Amelia Warner, reportedly expecting baby #3
You may also like
1 week ago
Strictly Come Dancing won't air this weekend due to the Queen's funeral
1 month ago
Stacey Dooley and Kevin Clifton are having a baby
1 month ago
Helen Skelton has accidentally revealed who her Strictly partner is
1 month ago
Max George and EastEnders actress Maisie Smith in secret relationship
1 month ago
The first Strictly 2022 contestants have been announced
1 month ago
Here's when Strictly Come Dancing returns to our screens
Next Page