Ben Foden speaks out about the "things he put Una through"

He claims they're "getting back on track"

Ben Foden has opened up about his former relationship with singer Una Healy.

He admitted that they had to put their differences aside because of their children.

Foden said things are "getting back on track" between him and his ex-wife, but it took time to get there.

He claimed time is the biggest healer and said it has eased things between them.

Speaking to The Daily Mirror, he said: "The way things happened and the things I put Una through were pretty stressful. I would be a brave man to say I knew it would happen like this.

He added, "But I'm happy things are getting back on track."

Foden said they needed time to "reflect and take a breath". 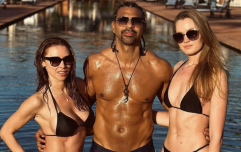 "At peace": Una Healy is reportedly in a throuple with David Haye and Sian Osborne

END_OF_DOCUMENT_TOKEN_TO_BE_REPLACED

"Una is a smart woman and she can be disappointed in me, but she knows we have two kids together."

"Una and I are getting better, as well as Jackie's relationship," he said.

"Our main job as human beings on this planet now is to raise these two kids together and hopefully we’ll turn them into beautiful people when they get older."

He said he has always said Una is a "great mother".

Foden said he and Healy were like "chalk and cheese", but Jackie is his "best friend" and his "real partner".

He added, "I never expected to get married again."

The Saturdays singer married the rugby star in 2012. They announced their separation in 2018.

A year after their separation, Foden met Jackie Belanoff-Smith in 2019. They welcomed their daughter Farrah in May 2020.

popular
Bride asks for divorce day after wedding following groom's disrespectful cake stunt
Police believe they know what happened to missing dog walker Nicola Bulley
Entrepreneur schoolboy has made £1,000 from selling sweets
Students given £500 after uni was unable to give them their degree certificates at graduation
Couple decide to live on cruise ship permanently after finding it's cheaper than paying mortgage
Molly-Mae's nursery leads to spike in demands for replicas
Bachelor Nation star Sarah Herron's baby passes away shortly after birth
You may also like
1 month ago
Una Healy's children will spend Christmas with their dad in America
3 months ago
Una Healy shares another touching tribute to Lynsey Bennett
3 months ago
"I'm very single": Una Healy says you don't need a partner to be validated
3 months ago
Una Healy admits that being her kids 'primary carer' is tough
5 months ago
Ben Foden says he would be lost without his wife Jackie
10 months ago
Ben Foden's wife Jackie claims he isn't a "slimy cheater"
Next Page