Britney Spears reveals hopes to have another baby after conservatorship ends

Britney Spears has opened up about her hopes to have another child.

The singer shared a photo of a toddler standing beside its mum on Instagram. Alongside the black and white shot, the Toxic singer said she would love to have another child.

"I'm thinking about having another baby!!! I wonder if this one is a girl ... she's on her toes reaching for something … that's for sure."

Another told Britney, "You were robbed of motherhood with your two boys. I hope you get everything you’ve ever wanted and more."

This isn't the first time the singer discussed her hopes to have another child. 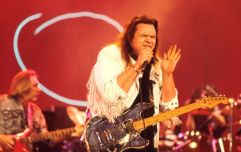 END_OF_DOCUMENT_TOKEN_TO_BE_REPLACED

During a hearing to end her conservatorship, Britney told the court: “I would like to progressively move forward and I want to have the real deal. I want to be able to get married and have a baby."

She added, "I have an [IUD] inside of myself so I don’t get pregnant. They don’t want me to have children — any more children.”

Her father, Jamie Spears was removed from Britney's conservatorship in September.

The conservatorship was completely dissolved on November 12th.

After being freed from her conservatorship, Britney revealed, "It still blows my mind every day I wake up how my family and the conservatorship were able to do what they did to me."

"It was demoralizing and degrading! I’m not even mentioning all the bad things they did to me which they should all be in jail for."


popular
Expert says Cocomelon acts "as a drug" to kids' brains
Whether you’ve got a baby on the way or have an army of your own, the Lidl Big Baby Event is here to help
"It took me by surprise": Holly Willoughby gets honest about her 14 year marriage
4 ways to fix hard slime with ingredients you probably already have at home
Graham Norton's book Holding is being made into a TV series- here's everything we know
Mum shares her hack for cleaning ball pit balls and it's such a time-saver
Can you pronouce these 7 'unique' baby names? They're trickier than you think

You may also like
1 week ago
Jason Momoa and Lisa Bonet split after 16 years together
1 month ago
Chitty Chitty Bang Bang star Sally Ann Howes has passed away
1 month ago
Stacey Solomon gets emotional after finally introducing Rose to her grandmother
1 month ago
John Whaite responds to "vicious" trolls who claim Strictly is fixed and "not natural"
1 month ago
"You have no clue": Jennifer Aniston hits out at claims she chose career over having children
1 month ago
Katie Price called out for "dangerous" parenting mistake
Next Page