Cleo has now been missing for 4 days.

The family of the missing 4-year-old Cleo Smith has spoken out for the first time since her disappearance.

Cleo has been missing since early Saturday morning, October 16th.

Speaking to the media in Australia, the distraught pair opened up about the moment they realised Cleo was gone.

The mum last seen Cleo at 1.30 am when she asked for water.

Her other daughter Isla woke up asking for a bottle a couple of hours later and the mum notice the zip of their tent was wide open.

The mum noticed her daughter's sleeping bag was also missing.

“As we passed the divider, I went into the other room and the zipper was open,” Ms. Smith told the media.

“Cleo was gone and that was about it for Saturday morning until everything started. 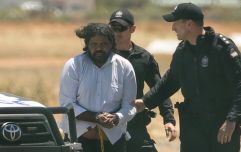 END_OF_DOCUMENT_TOKEN_TO_BE_REPLACED

They searched around the Blowholes Campground in Macleod, near Carnarvon.

The mum said they feel "hopeless and out of control" as the search continues.

“Everyone asks us what we need and all we need is our little girl home,” she confessed.

Cleo has been missing for four days.

Search efforts were halted due to bad weather, but have since resumed.

Investigators fear Cleo either wandered off or was kidnapped while her family was sleeping.

“I wish I had some answers for the family, but unfortunately we simply don't know and as the hours go by and the days go by, our concerns get more and more grave,” Inspector John Munday commented.

Inspector Munday added, "We do have grave concerns for her. It is a race against time."

Australians have been urged to report any possible sightings of Cleo as investigators fear she could be interstate by now.


popular
My sister wants to marry our dead sister's husband- how could she do this?
Get the most out of the latest sales with this Irish online shopping service
You can now stay in the house from Home Alone
12 Elf on the Shelf ideas that your child is bound to love
Nearly there now: 10 easy – but fun – Elf on the Shelf ideas for the last few days
Aunts are as important as mothers when raising daughters, study finds
Louise Redknapp responds to claims she's in "despair" over Jamie's new baby
You may also like
3 days ago
Brother of Amber Gibson charged in connection with her death
3 days ago
"He was my best friend": Mother of Arthur Labinjo-Hughes pays tribute to her son
4 days ago
Mum issues warning after gang of men offer to 'buy her daughter' outside school
4 days ago
Man arrested after the body of 16-year-old Amber Gibson found in park
5 days ago
15-year-old boy arrested after shooting at Oxford High School
6 days ago
Baby and toddler among 4 killed in Barcelona fire at abandoned bank
Next Page