"Making memories can be hard when you are dying": Deborah James praised for honesty about cancer battle

"I spent most of yesterday in tears"

Dame Deborah James has been praised for how honest she has been about her cancer battle.

The mum is currently receiving hospice care at her home but has vowed to make as many memories as possible.

However, the activist said things haven't been easy for her recently.

"Making memories can be hard when you are dying! Oh, the pressure!!"

"I’m now only getting some very grabbed hours between the sleeping and side effects," she explained.

Deborah revealed she is now struggling to leave the house and her bed. This has made her feel "pretty down" but it hasn't stopped her from creating memories.

She revealed that her family hosted a sleepover for her and it reduced her to tears.

"This girly sleepover managed to put such a smile on my face having spent most of yesterday in tears!" 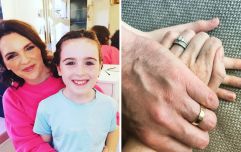 Vicky Phelan lends some support to Saoirse Ruane after surgery

END_OF_DOCUMENT_TOKEN_TO_BE_REPLACED

Deborah explained that she had already been feeling awful after a bad day, but her sister organised the sleepover party within hours.

"I’m getting less and less able to leave the house, or bed really now, so was feeling pretty down about it. Or do anything for that matter!

"They wheeled me into the room last night and yes I cried over the fairy lights! Good tears! It was just perfect!"

"I went from staying in my wheelchair to ending up everyone helping to get me into an actual Teepee to watch Cinderella with the gang.

Deborah said she felt like "a 5-year-old with a huge Cheshire Cat smile on my face next to my daughter and sister!"

"Today I sleep! But with another memory and a smile."


popular
How to keep your fake tan on for longer during the heatwave
Five teenage girls rushed to hospital after crash in Kilkenny
Ekin-Su and Davide taking their mums to New York with Love Island winnings
Dr Laura Lenihan shares her expert advice on how to stay safe in the sun
Irish people could be treated to spectacular sights in the sky over the next few nights
Richie Sadlier and wife Fiona expecting baby after being told they couldn't conceive
Andrew McGinley is planning on divorcing Deirdre Morley
You may also like
2 months ago
Bowel cancer warnings should be on toilet paper, Deborah James says
3 months ago
Podcaster Deborah James in "disbelief" after cancer fundraiser raises millions
3 months ago
"We have tried everything": Podcaster Deborah James moved to hospice
3 months ago
Kerry family appeal to buy family home after parents dies only months apart
3 months ago
Tom Parker's wife Kelsey opens up about the moment she told her daughter about his death
3 months ago
Toy Show star Saoirse's family reveal her cancer has come back
Next Page