Paralympian swimmer Ellie Simmonds has shared that she has received cruel abuse online after making her Strictly Come Dancing debut on Saturday night.

Ellie, who has achondroplasia, was paired with Nikita Kuzmin and they danced the Cha Cha, receiving 26 points from the judges, an impressive score for the first week.

However, Ellie told The Sun that she was hit with ableist abuse online following Saturday's show.

"I've had it already," she said. "Some people have said, how's the dwarf going to dance?"

The five-time gold medalist added: "It's sad and it does get to you." 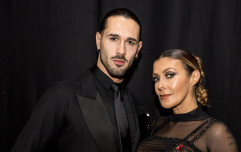 END_OF_DOCUMENT_TOKEN_TO_BE_REPLACED

Ellie first competed in the Paralympics in Beijing in 2008 when she was just 13 years old, making her the youngest British athlete to take part at the time. She swam in the 50m, 100m, and 400m freestyle, as well as the 50m butterfly and the 200m Individual Medley. She took home the gold medal in the 100m and 400m events.

Ellie competed in the Tokyo 2020 Paralympics last year but missed out on a medal. She subsequently announced her retirement from the sport last September.

Prior to joining the Strictly Come Dancing lineup, Ellie said that dancing is completely out of her "comfort zone", but shared that she is inspired by previous disabled contestants on the show.

"I feel like, I’ve seen Rose do it last year, JJ, Lauren, and Johnny," she said. " I’ve had so many people reaching out, not just in the UK but worldwide like, 'Wow Ellie you’re doing this, you’re going to help us and represent us.' It’s a huge, huge honour."

popular
Parents told to stop buying selection boxes for kids- here's why
Opinion: He may be a politician, but Leo Varadkar's personal life is none of our business
People are realising what the red Christmas lights are actually for
Fans are concerned about Molly Mae Hague after resurfaced interview
This Netflix Christmas film is being dubbed the perfect rom-com
"My heart sank": Tubridy hit with backlash over Toy Show remark
"I slept with your fella": Vogue reveals her ex cheated on her four times
You may also like
1 month ago
Here's everything we know about the Strictly mole drama
1 month ago
Helen Skelton's ex- husband expecting baby with new girlfriend
1 month ago
Strictly's Jayde Adams slams fat-shaming comments
1 month ago
Calls to fire Shirley Ballas from Strictly Come Dancing
2 months ago
Strictly Come Dancing won't air this weekend due to the Queen's funeral
3 months ago
Stacey Dooley and Kevin Clifton are having a baby
Next Page