Toddler dies after falling from balcony in New York

The little boy was playing in the living room when he wandered out to the balcony.

A 3-year-old boy has tragically died in a freak accident in Harlem, New York.

The young boy's mother believed he was safely playing in the apartment. She went into the room next door to where her son was to talk to her partner.

However, she grew concerned when she could no longer hear her son playing in the living room.

The mum then heard the netting on the apartment's balcony flapping in the wind.

He fell from their 29th-floor apartment to the third floor of the other building.

The child's mother and father were talking in the next room when he wandered out onto the balcony.

The young boy has been identified as Jayce Garcia. He was only 3 years old at the time of his death. 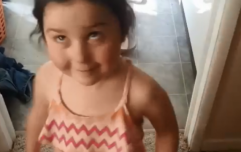 END_OF_DOCUMENT_TOKEN_TO_BE_REPLACED

According to The Post, neighbours could hear the mother screaming "my baby" after the harrowing accident.

Jayce Garcia was rushed to hospital in a critical condition but passed away a short time later.

Police are treating his death as an accident.

They believe the 3-year-old wandered out onto the balcony when his parents weren't looking. He then climbed onto a chair to look out but fell from their 29th-floor apartment.

It is believed many residents in the Harlem high-rise would leave their balcony doors open due to issues with the building's air conditioning.

A full police investigation is now underway after the young boy's heartbreaking and untimely death.

popular
Emma Pattison made distressed call to sister before murder-suicide
Vogue Williams opens up about her divorce from Brian McFadden
Dunnes Stores launches stunning collection of Communion dresses
Siblings kidnapped in March 2022 have been found alive
Expert team end search for Nicola Bulley declaring she’s not in the water
Brendan Fraser blamed himself after son's autism diagnosis
Stacey Solomon hints at baby girl's name as due date nears
You may also like
4 months ago
Is it wrong to let my toddler play in the garden on her own? My neighbour says it is neglect
5 months ago
Are 'potty pops' the way forward when it comes to potty training your toddler?
5 months ago
Toddler tragically dies after freak hailstorm in Spain
6 months ago
Toddler 'traumatised' after stepping on burning rubbish on Irish beach
7 months ago
Toilet training regression: What it is and what can you do to help solve it
8 months ago
Toddler drowns in swimming pool while on holidays in Spain
Next Page