"I fell apart": Kathryn Thomas opens up about her baby girl's hospitalisation

Seeing your child in hospital is truly the worst feeling. As Kathryn Thomas recently said, "it is every parent's worst nightmare".

The mum-of-two opened up about her daughter Grace's recent hospitalisation.

The Operation Transformation host said it was an "absolutely horrific" experience.

Speaking to the RTÉ Guide, Thomas said, “I was fine until I got to the door of the emergency department and then I fell apart.

“You hand over the most precious thing in the world to people you don’t know, but who you trust implicitly," she added.

The mum revealed her daughter had to be tested for numerous conditions, including sepsis.

"Grace was tested for meningitis and sepsis and had to get a spinal lumbar puncture."

“I knew instinctively it was nothing like that, but they had to take those preventative measures, including giving her intravenous antibiotics, just in case it was sepsis or meningitis.” 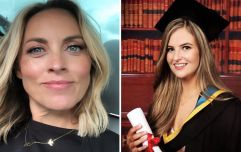 END_OF_DOCUMENT_TOKEN_TO_BE_REPLACED

Her little girl was eventually diagnosed with bronchiolitis.

"We just spent 3 days in Crumlin with little Grace. Her breathing got very laboured on Wednesday so I brought her straight to A&E."

"She was diagnosed with bronchiolitis but thanks to the incredible nurses and doctors she's home now and doing great," the mum wrote at the time.

Grace is Kathryn's second daughter. The mum said her daughter has been a true source of joy after the last few years.

"With all the terrible stuff happening in the world, Grace has been a little beacon of light for me. She's a distraction from all the other stuff.”

The presenter is also a mum to 3-year-old daughter Ellie.

popular
Shock after baby is discovered alone in pram late at night in Dublin
HSE issues advice for parents if their child starts choking
Stacey Solomon's fans think they've figured out her baby's name
Conor McGregor hit by car ‘at full speed’ while cycling
Andrew McGinley honours his children on their third anniversary
Gemma Atkinson slams trolls who accused her of having baby with another man
Joanna Cooper heartbroken after her mum is diagnosed with dementia
You may also like
1 month ago
RTE announces Operation Transformation is returning to our screens
5 months ago
Kathryn Thomas reveals her first daughter is starting school
9 months ago
Kathryn Thomas says bringing her baby girl to A&E was "an outer body experience"
9 months ago
"Heartbreak and disappointment": Kathryn Thomas opens up about fertility struggles
11 months ago
Síle Seoige and Kathryn Thomas introduce their babies to each other for the first time
11 months ago
Kathryn Thomas defends Operation Transformation after severe backlash
Next Page