"They kicked my 3-year-old out of the carousel line"

Someone needs to remind Kylie Jenner that just because you can do something doesn't mean you should.

The mum has come under fire after ruining a zoo trip for dozens of families.

The 24-year-old has caused quite the drama online after she reportedly forced families out of the zoo so her daughter Stormi could enjoy it privately.

Parents expressed their anger after numerous children, who were queueing for the carousel, were forced to leave because Jenner's daughter wanted to go on it.

It is believed numerous children missed out on the carousel because of the family's outing.

One mum said her little boy queued up twice and was "kicked out" twice because of Jenner.

One visitor opened up about the incident.

They shared: "I was at the zoo with the family. We were in line at the carousel. The kids were about to get on the ride and the employees were explaining the rules. All of a sudden they come and tell everyone to get out of line and back away from the ride because of a VIP and wouldn’t you know it’s Kylie, Travis, and Stormi."

"This one family in front of us was pissed they said this was the second time they did this to them today. Their three-year-old had already been in line once and gotten kicked out and now it happened again. The ride stayed closed for a while so we weren’t able to get back on it before we left," they explained.

Travis Scott and Kylie Jenner were spotted at a zoo in houston yesterday pic.twitter.com/sXFPXee7z9 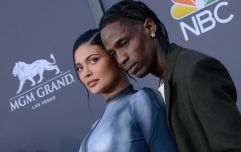 END_OF_DOCUMENT_TOKEN_TO_BE_REPLACED

"It wasn’t cool. Her security detail was super rude to everyone also. Yelling at us to back up. Excuse me we just paid and waited in line for a ride and now we’re being pushed aside for your clients? A bunch of kids ended up crying because of them," they revealed.

"They kicked my 3-year-old out of the carousel line after scanning her ticket TWICE today. Had to go home for nap time with a disappointed toddler," one mum said.

A spokesperson for Houston Zoo told the Houston Chronicle: "While we never like to close any part of the Zoo, sometimes security measures must be taken for everyone’s safety."

People were far from impressed and expressed their disgust online.

"There are so many celebrities who literally just try to blend in and enjoy things without making a fuss (especially in the mask era) which is what makes Kylie and Travis shutting down rides and forcing ~regular~ children off of them so pathetic," one said.

Another added: "Kylie Jenner going to the Houston zoo and forcing kids and parents off of rides and out of lines so she can privately ride them is so … mean …."

"If they wanted the rides shut down then they should have booked the zoo for a private day. You can't just not let other paying customers on rides," one added.

People have suggested that Jenner should refund the families who were affected by her visit.

Do you think they're over-reacting or is their anger understandable? These family outings are pretty pricey, especially when you're not a 20-something billionaire.

popular
This is everything women need to know about ovarian cysts
Babies born in February have some pretty cool advantages – no, really – it's true
Police believe they know what happened to missing dog walker Nicola Bulley
Study says that dads get more sleep than mums and tell us something we don't know
Expert says Cocomelon acts "as a drug" to kids' brains
Bride asks for divorce day after wedding following groom's disrespectful cake stunt
Man sues friend for £1.9m after she refused to be his girlfriend
You may also like
2 weeks ago
Here's how to pronounce Kylie Jenner's son's name
3 months ago
Kylie Jenner says having the baby blues is "really hard"
4 months ago
Kylie Jenner admits she hasn't legally changed her 7-month-old son's name
8 months ago
Did Kylie Jenner accidentally reveal the name of her baby boy?
9 months ago
Kylie Jenner gives first glimpse of her adorable baby boy
9 months ago
Kim Kardashian admits to photoshopping her niece True into Disneyland photos
Next Page