She will potentially have two children under the age of 1.

Huge congratulations are in order for Lauren Goodger who is expecting her second child.

The mum revealed she is already 16 weeks pregnant with baby #2.

The reality star confirmed the news in an interview with OK! Magazine. She said the pregnancy is unexpected, but she is excited to grow her family.

The mum will likely have two children under the age of 1 when her second child is born.

She told OK! she was in two minds about the pregnancy.

"A lot went through my mind which is why I’ve held out a bit longer until I’ve announced it. Charlie was like, “I really want this baby.” And I said, “So do I.” I made the decision to go ahead with it and I’m so glad I did."

Lauren confirmed Charles Drury is the father of her second child too. However, the couple has split up again.

The soon-to-be mum-of-two said she is slightly nervous about having two kids under the age of one. 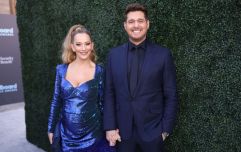 END_OF_DOCUMENT_TOKEN_TO_BE_REPLACED

"It’s going to be really tough, but I’m going to do it. I’m going to feel really rewarded after and have some beautiful gifts I’d never regret."

Despite the nerves, Lauren can't wait to welcome her bundle of joy later this year. She even revealed she's expecting a baby girl- a little sister for her daughter Larose.

Lauren said she can't wait for her 6-month-old daughter Larose to become a big sister.

However, she is aware that things will be very different for her this time around.

"This time it’s a whole different thing I’m going through. I’ve got a six-month-old and I’m doing this pregnancy by myself.

popular
Brian Dowling: "Aoife never thought the baby was hers"
Lauren Graham shares who she thinks Rory's baby daddy is
These 40 baby names are set to trend in 2023
This CoComelon toy is set to sell out before Christmas
Release date for Prince Harry and Meghan Markle's Netflix series confirmed
Expert says Cocomelon acts "as a drug" to kids' brains
Warning issued to Irish parents after increase in RSV cases
You may also like
4 months ago
Khloe Kardashian had no idea Tristan cheated until after their surrogate got pregnant
4 months ago
"Welcome to the world": Alexandra Burke has given birth to her first child
5 months ago
Barry Keoghan confirms his girlfriend is pregnant with their first child
6 months ago
Ed Sheeran and his wife Cherry welcome their second child together
7 months ago
Coronation Street's Catherine Tyldesley welcomes her second child
8 months ago
Michael Sheen and his partner are expecting their second child together
Next Page