Made in Chelsea's Louise Thompson announces pregnancy with Ryan Libbey

"I feel safe in the knowledge that you are going to be the best dad in the world."

Made in Chelsea star Louise Thompson has announced that she is expecting her first child with her partner Ryan Libbey.

Earlier this year, Thompson suffered a miscarriage, which has influenced her decision not to document her current pregnancy.

In her most recent announcement, the star shared that she is happy to have reached the "hopeful milestone" of 12 weeks.

"Unlike last time, Ryan and I haven't documented our journey at all," she wrote. "I've hardly taken any pictures or videos for fear that something might happen."

Louise also mentioned that she's been suffering from fatigue and other symptoms.

"I've also felt like ASS," she said. "I never knew that fatigue or 'flatness' like this existed in pregnancy."

The Made in Chelsea star added that instead of before-and-after photoshoots, she has a drawer filled with a "bazillion, gazillion pregnancy tests".

She acknowledged Ryan for being "such a sensitive partner", and added that he is going to make "the best dad in the world". 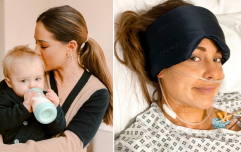 Louise Thompson speaks out about suffering from PTSD

END_OF_DOCUMENT_TOKEN_TO_BE_REPLACED

The reality star then shared her news, and added that she would have liked to wait a little longer, but felt she could no longer hide the physical signs of her pregnancy.

"There is absolutely ZERO room left in this 5ft short torso for a growing bump except to push MASSIVELY outwards which means it's becoming very hard to hide."

Louise went on to ask her followers for advice on one side-effect in particular.

"There are so many things happening to my body THAT NO ONE TALKS ABOUT," she said.

"Hormones are a thing of absolute madness and pregnancy coupled with ulcerative colitis has been a major killjoy and particularly anxiety-inducing.

"Who's experienced it? I've always been a firm believer that women are superhuman for what they put up with and now I have even more reason to stand by that."

popular
Bride asks for divorce day after wedding following groom's disrespectful cake stunt
Police believe they know what happened to missing dog walker Nicola Bulley
Entrepreneur schoolboy has made £1,000 from selling sweets
Mum's photo of toddler's travel cot after it was cleaned will turn your stomach
Expert says Cocomelon acts "as a drug" to kids' brains
Identical twins trying to get pregnant at same time with shared fiance
Dad admits he hates his daughter's name so much it makes him uncomfortable
You may also like
1 month ago
Made In Chelsea stars Ollie and Gareth Locke-Locke reveal their surrogate has had a miscarriage
1 month ago
Made in Chelsea's Louise Thompson has been diagnosed with lupus
1 month ago
"Hard to be a parent": Made In Chelsea's Maeva D’Ascanio rushes newborn son to A&E
6 months ago
Louise Thompson has been admitted to hospital
9 months ago
Made In Chelsea's Tiffany Watson reveals she has suffered a miscarriage
1 year ago
Made in Chelsea's Louise Thompson "very unwell" after birth of son
Next Page