Victoria Beckham is reportedly worried about her daughter's safety after a woman turned up at her school claiming to be her mother.

The woman had been stalking David Beckham for months.

It is believed 58-year-old Sharon Bell had been showing up at David's residences, as well as Harper's school.

A source told OK! magazine that the mum is now extremely concerned about Harper.

Prosecutor Arizuna Asante said: "She is now scared to go out. It has made it hard for her. She is worried, especially when Harper goes on school trips.”

Asante then read out a letter written by Victoria about the ordeal.

“The school called me asking if Harper could be collected early. I went with security.

“At the school, the police attended and arrested the female. I did not speak to her but saw her as we were leaving. 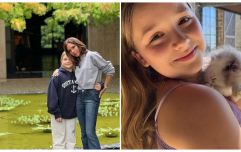 END_OF_DOCUMENT_TOKEN_TO_BE_REPLACED

“I have not seen her before or recognise her. The incident made me feel upset and frightened.”

Ms. Bell has been charged with stalking.

She initially started stalking the father in 2016 but lied and told them she was a mother of a child in Harper's school.

Bell is now banned from approaching and messaging David Beckham, Victoria, or any of their children.

She can no longer be within 500m of the sportsman's homes, including his mansion in the Cotswolds and his London home.

Ms. Bell has also been ordered to stay away from Harper's school.

popular
Irish dad shares warning after his 12-week-old baby was hospitalised with RSV
9-year-old boy will "never be the same again" after Wexford dog attack
7 Christmas markets and Santa experiences to visit with kids this winter
Olivia Wilde wanted to work through issues with Harry Styles
There's a FREE Santa experience happening in Dublin
"I want to spend all my time with them": Vogue Williams on suffering from mum guilt
Expert says Cocomelon acts "as a drug" to kids' brains
You may also like
7 months ago
David Beckham sobbed during his speech at son Brooklyn's wedding
7 months ago
Burglar broke into Victoria and David Beckham's home while they slept
8 months ago
Victoria Beckham shuts down claims daughter Harper was drinking wine
1 year ago
Victoria Beckham is every mum trying to get the kids to pose for a Christmas card photo
2 years ago
The Beckhams have just had a BIG couple of weeks – and they are still so, so in love
2 years ago
Victoria Beckham reveals what she eats every day for perfect, flawless skin
Next Page