Warning to parents after kids in Dublin playground targeted by firework

The teens pointed the firework right at kids in the playground.

As excited as we are for Halloween, we have been dreading the increase in illegal fireworks all around the country.

They're harmful, reckless and leave our poor pets on edge. They can also cause life-changing injuries. There's simply nothing to like about them.

Gardaí have warned the public about the illegal use of fireworks, but that hasn't stopped some groups from getting their hands on them.

Last week, a young woman in Galway was hit in the face by a firework, leaving her with life-changing injuries.

The horrifying attack in Eyre Square highlighted just how unsafe fireworks are and the detrimental damage they can cause.

Parents in Dublin recently warned others to be cautious in Cabinteeley Park after a teenager targeted a firework at the local playground.

The concerned mum wrote, "I'm shaking after getting this news."

The incident happened over the Bank Holiday weekend. 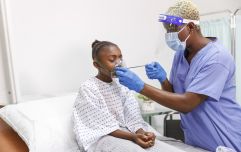 END_OF_DOCUMENT_TOKEN_TO_BE_REPLACED

Luckily, nobody was injured in the attack.

"The story of that woman in Galway with life-changing injuries did the same thing is haunting me," the mum wrote.

She couldn't believe that they would aim fireworks at little kids in the middle of a family park.

It is believed a group of parents confronted him after the attack.

The mum admitted, "I'm hoping he'll be brought before the guards. Not that any good will come of it."

She urged parents to be as careful as possible especially around Halloween.

"Just a reminder to be on the lookout and keep yourself and the kids safe this week. Especially in areas where there might be teens hanging around bored and tempted to do something f***ing stupid and potentially life-altering."

"This happened in a pretty affluent part of Dublin, so it can happen anywhere," she added.


popular
Expectant mum says MIL wants her to 'hold off' giving birth until her renovations are done and what?
Ryanair passenger refuses to swap seats with mum and baby- was she wrong?
Mum reveals why you should never let your child sit on your lap on a slide
New mum devastated that her mother-in-law held her baby before she got to
Rebekah Vardy storms out of court just 30 minutes into final day
Ed Sheeran and his wife Cherry welcome their second child together
People traveling to Spain warned about "unusual" heatwave
You may also like
1 day ago
Saoirse Ruane's mum gives update after her daughter's surgery
1 day ago
Two teenage boys found guilty of violent disorder at DART station
1 day ago
"I tried to bring her back": Santina Cawley's mother speaks out about daughter's murder
2 days ago
Hundreds of childcare providers to close their doors next year
2 days ago
"The worst thing was finding her": Family of Santina Cawley pay tribute to toddler
3 days ago
Karen Harrington found guilty of murdering toddler Santina Cawley
Next Page