Discrimination At Work For Being Pregnant? You Better Believe It

For millennia, women have been having babies, but it seems to be a concept that some workplaces still have trouble understanding...

Although it is, of course, illegal to discriminate against an employee because she is pregnant, unfortunately, it still happens. A recently published UK report shows that three-quarters of women who are pregnant or returning from maternity leave experience discrimination, and one in five said they had been subjected to harassment or negative comments.

Could the same happen here in Ireland? Our research is not as current as that of our UK counterparts, but it does show that there is a problem. An ESRI report published in 2011 showed that 30 per cent of women had experienced unfair treatment while pregnant, and 5 per cent had been dismissed. One in ten women surveyed reported a loss of salary or bonus or denial of promotion while pregnant.

Indeed, the mommy track, as it’s known, is the uncomfortable and often frustratingly intangible position in which many women find themselves after having children.

“I've definitely been put on the mommy track,” says Cara*. “I was passed over for promotion while I was on maternity leave - the guy seconded in to cover me ended up getting it instead when I had always acted up to the senior position.”

Part of what’s difficult about the mommy track is proving that it’s as a result of motherhood or confronting management, and this in turn is hugely damaging for self-confidence, as experienced by Joanna.

“I went back to a very different job both times and couldn't do anything about it in a small company. But it was desperate. There was never blatant discrimination. It was actually worse – being mommy-tracked – it does horrendous things to your confidence!”

Sometimes discrimination is unintentional – problems can arise simply because managers are not aware of the rules, as discovered by Sarah.

“My boss told me I had to use all my annual leave for the year before I go on maternity leave this summer. She also told me she didn’t want me to take a day here or a day there – I was to take it all together and finish up earlier than I’d planned. When I questioned her on this, she said, ‘That’s HR policy, I doubt the HR manager is wrong.’”

Of course, it was incorrect, and Sarah doesn’t have to use up her leave – it has all been clarified now in a meeting with HR. “It was so stressful at the time,” she says. “I was researching all over the place to find out my rights. I could reel them off for you now after all that – it really pays to know your entitlements.” 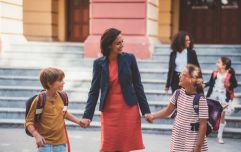 According to research, working mums of two are almost twice as stressed as working women with no kids

END_OF_DOCUMENT_TOKEN_TO_BE_REPLACED

Many women are also putting up with inappropriate comments about pregnancy and maternity leave.

Caroline remembers meeting her manager in a restaurant, along with some other colleagues, and their children. “She said our kids were cute, then said ‘But no more pregnancies this year!’ It was a joke, but as I was pregnant at the time it was kind of awkward!”

Eimear works in nursing, and recalls a time when she and another colleague were pregnant, and a new member of staff was starting. “We were told by our manager in the coffee room ‘It's great to be getting a male nurse – at least he won't be looking for maternity leave.'”

Cara too experienced some inappropriate comments. “I was at a meeting with a group of senior men when one of them - who needed my sign off so that his project could be finalised – said, as he pointed to my seven-month bump, that he 'appreciated I had other things on my mind, but that I needed me to focus on what [he] needed done.'”

Denise had a positive experience overall and found that management were good about maternity leave, but did have a sense of being marked out on one occasion. “I was at the company Christmas party last year, and one of the directors called me and another working mum her ‘maternity ladies’! Not very offensive, but it was also letting us know that she sees us differently.”

And that’s just it. Of course, it’s not terribly offensive in itself, and it’s likely the director in question meant no harm. But it’s the little, everyday, casual comments that contribute to a sense that being pregnant at work is somehow ‘other’ – that it means more than it should. That the employee is not focused or not capable or no longer reliable. That pregnancy is a pain and maternity leave is something to be tolerated begrudgingly at best. It is illegal to discriminate against pregnant woman, but more than that, it does everyone a disservice. If women are directly or indirectly coaxed out of the workplace, everyone loses – employers lose valuable talent and face hiring and retraining costs, and women lose confidence, at a time when they’re at their most vulnerable.

Of course, there are many, many women who have no negative experience at all when working during pregnancy and after maternity leave.

“I had a great experience,” says Jane. “My boss is a mum, has two kids and does a four-day week, so she was very supportive and understanding. Since I returned to work 12 months ago, I've been promoted and had a salary increase, and I have started taking parental leave one day a week.”

More of that please employers – and in a tighter recruitment market, you need us as much as we need you.

*Names have been changed


popular
Introduction of new model for allocating SNAs for mainstream classes in 2020
Mum switches off WiFi every time her husband 'camps' in bathroom to avoid helping with newborn twins
Penneys is selling the cosiest grey jumper for just €12, and we need it
The stunning €30 Zara top that will instantly refresh your wardrobe for spring
6 vey weird pregnancy tests from olden times
These blue mom jeans from Penneys are actually unreal, and they're only €17
The reason why mums wake up when babies cry and dads stay asleep is interesting
You may also like
2 months ago
Single dad tells his employees to stop apologising for having lives outside of work
3 months ago
Work-life balance: The 4 organisational tricks I rely on for a less stressful life
5 months ago
Showing the other side: My children went to creche and I am so grateful for their time there
6 months ago
This 10 minute Sunday hack that has completely transformed my life
11 months ago
A mum has listed everything she does in the morning and we SO get it
11 months ago
8 things that ALL working mothers will definitely relate to
Next Page