Over the past couple of decades, the average age of first time mothers has been creeping up, and currently, in Ireland, women are aged between 30 and 34 before they give birth to their first baby.

In fact, there are now in many Western countries more women who give birth after 40 than women who have a child before the age of 20. In fact, accordig to statistics, numbers released in May 2019 show that while birth rates have been declining for nearly all age groups of women under 40, they're up for women in their early 40s.

Actress Eva Longoria was 43 years old before she became a mum last year to her son, Santiago Enrique Bastón.

Longoria, who is married to businessman Jose 'Pepe' Baston, recently featured on the cover of Parents Latina, and in the feature interview, the mum-of-one explains that her 40s was the perfect decade to become a parent.

Hey ya’ll 2 of my favorite things: being a mother and being Latina! Don’t forget to pick up your copy of Parents Latina to read my interview and see beautiful pics of baby Santi ?” 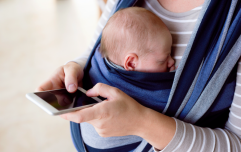 END_OF_DOCUMENT_TOKEN_TO_BE_REPLACED

"He was meant to be with me at this stage in my life," the 44-year-old explains. "I'm more patient, and I don't work as much—even though it doesn't seem that way!"

But juggling parenthood and work isn't easy, whether you are a celebrity or not, even though Longoria says she is lucky in that Santiago has been able to be with his mum on set for a lot of the first year of his life.

"Going back to work was hard. Breastfeeding while working was hard, just for the timing of the pumping and the feedings and the sleeping and the not sleeping," Longoria tells Parents Latina."You just do it and get it done."

popular
Viewers raise over €290,000 after Munster's Billy Holland and wife Lanlih's emotional Late Late Show appearance
Expecting a baby boy? 10 short and sweet names that are actually really cool
Brad Pitt's response to the drama over his reunion with Jennifer Aniston is interesting, to say the least
Mother says she used tech gadget Alexa to potty train her son and it worked wonders
The most popular baby names in the world have been revealed
Angelina Jolie 'doesn't care' about Brad and Jen's reunion - and unfortunately, she's the only one
The ironing hack that's about to make your everyday life so much easier
You may also like
1 day ago
The images that sum up what motherhood ACTUALLY looks like (and you know it's true!)
1 day ago
If you could have a "parenting do-over", what would you change?
2 days ago
Mum starts debate after admitting to wanting to invite only 10 kids from daughter's class to her birthday
4 days ago
5 handy tricks that might help your child stop wetting the bed
4 days ago
Don't ask your kids if they've had a good day at school (but ask this instead)
4 days ago
Here's the simple question that can diffuse a toddler tantrum in 10 seconds flat
Next Page