My two kids are incredibly close. And having co-slept with both of them when they were babies and toddlers, they still prefer to not sleep alone in bed, but would much rather snuggle up to me – or each other. And look – I don't blame them. As adults, we love the feeling of safety and warmth it brings sleeping next to someone, so it really isn't strange or odd that children are the same.

And this mum knew just how to make this easier on everyone.

Speaking to Kidspot, the UK based mum-of-three explains that her nine-year-old son, Dexter, was complaining about having to sleep alone in his own room when his two younger brothers, Zaccariah (7) and Elyjiah (5), has each other for company in a bunk bed in their shared room.

In an attempt to keep the peace, she started letting them all snuggle down on the bottom bunk.

"It started as a weekend thing and became an everyday thing!,” the mum-of-three tells Kidspot.

“I was worried only because one would have to climb over the others, which would wake them up.”

Charlotte explains she loves how her sons have such a close relationship – however, she worried that they didn’t have enough space sharing the same single bed.

And then she spotted a friend selling an IKEA day bed online that could fold out to a double bed online – and snapped it up.

And now, sleeping side-by-side in the giant bed, the boys are delighted, she explains.

“I’d had never seen anyone doing this before, so I literally made it up as I was going along,” she says about her bed DIY. 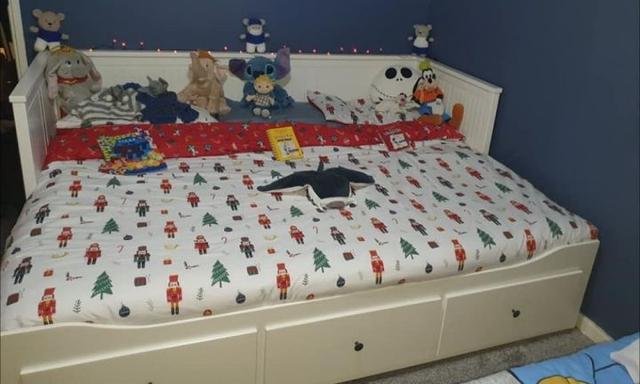 “The boys loved it and were over the moon.”

Charlotte adds that she knows the sharing arrangement “won’t last forever” but plans to enjoy it while it lasts.

“They will all go back to their own beds eventually but for now it’s the right thing for our family,” she says.

“There is nothing wrong with a brother-cuddle especially in the winter nights.” 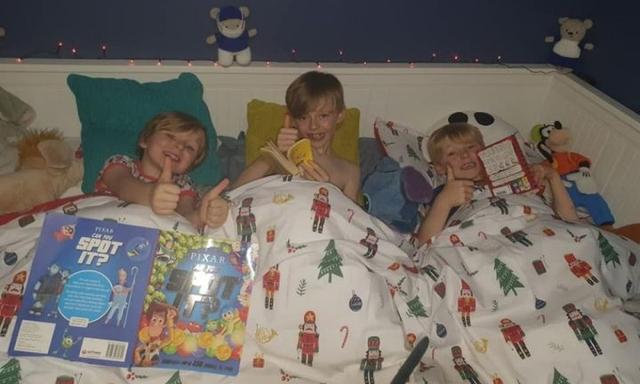 popular
Jacques O'Neill speaks out about Paige and Adam's relationship
Planning your next getaway? Here are 6 fun family activities to try this summer
This mum's post about dying to send her kids back to school is too funny
4-year-old girl killed in house explosion in London, police confirm
Barry Keoghan announces the name of his baby boy
Child killed in house explosion in London
Ashling Murphy had so much more to give, says heartbroken parents
You may also like
1 day ago
Osteopath shares mesmerising trick that calms colicky baby in an instant
3 days ago
Creative mum reveals tricks to occupy kids on weekends without spending money
4 days ago
Parenting influencer accused of exploiting her toddler and attracting predators
1 week ago
Sonya Lennon reveals ‘judgement’ her daughter, 17, experienced when buying pregnancy test
2 weeks ago
Confession: "I spy on my husband to make sure he is cleaning"
3 weeks ago
This resturants 'Maternity Salad' claims to help overdue mums go into labour
Next Page