A while back I read that actress Jennifer Garner has an annual "Yes Day" with her three kids.

A "Yes Day," in case you are wondering, apparently is a day when Garner has to say yes to everything her kids (Violet, 11, Seraphina, 8 and Samuel, 5) ask of her. According to Garner, this is a long-running tradition in her household, and one she credits the authors of the children's book, Yes Day.

In the "Yes Day" book, the story is all about a special day where parents say yes to things like pizza for breakfast, food fights and late bedtimes. It’s beloved by kids, and—according to Amazon reviews—by adults too, so it’s worth adding to the reading list, by the way.

While you might be thinking that no way could you hack a day where you have to say yes to everything your kids ask (Pizza for breakfast? Ice cream instead of dinner? Endless games of My Little Pony Monopoly?), just think about it for a second – us parents say no a lot.

Admit it – we do. A lot of those 'no's' are for good reasons (because ice cream before dinner just isn't going to cut it nutritionally in the long run), wouldn't it be fun (and a little terrifying) to actually, for once, say yes to their requests?

Which is why a couple of weeks ago I decided to to a "Yes Day" with my own two children– and lived through it to tell the tale.

I picked a Saturday, worried that having a mid-week Yes Day would cause (more) mayhem and none of us would make it to work and creche at all.

To say the kids were excited is an understatement – a whole day of me saying yes to whatever they wanted? They almost couldn't believe it, and were filled with questions as to what they could ask for (pretty much whatever, but things like "Can I have a pony" were a little bit too far fetched to be granted), how many wishes they each had (they somehow saw this as a bit of a genie in the bottle situation, I figured) and just generally counting down sleeps from I told them on like Wednesday until the Saturday when this would all go down.

Waking up at 6.04am on the morning of our "Yes Day," my 8-year-old asked if I would make them pancakes for breakfast – and could we eat them in our pyjamas while watching a Monster High movie? And so it began.

"Can I have sprinkles on my pancakes?" my 4-year wanted to know. Sure, kid – knock yourself out. "Nutella? Of course."

The Monster High movie was followed by four episodes of Super Ranger Mini Force and some hot chocolate – because that's where this day was taking us.

Once the movie and Mini Force marathon was over, and it was time to get dressed, my 8-year-old, just to test me, I guess, asked if we could play a board game before we got dressed. And much as I was at this point dying to get us out of the house and make a much needed coffee run to my local drive-thru (yes, really) coffee spot, sure I was in no position to say no. So board games it was. Two rounds.

Finally dressed and in the car, 4-year-old wants the Moana soundtrack put on (which I have to root out, having hidden it when, a couple of weeks back, it got to the point where I would want to weep every time I had to sit through Auli'i Cravalho singing "How Far I'll Go."

Coffee, I just had to keep reminding myself – just wait until the coffee kicks in.

After coffee, we hit the playground. Then we went swimming. Had lunch in Eddie Rockets, and rounded off a very indulgent afternoon with a trip to the cinema ("Sure you can have popcorn and pick-n-mix.") On the way out from the cinema, my daughter asked if we could take the longer route walking home, as it was sunny out. We did. And I found that I much prefer that route from the shortcut we normally take, always in a hurry to get from A to B, like I would imagine most people are these days.

We chatted all the way home, stopped to look at some cows at Airfield (a fully working little city farm right in the heart on Dundrum, if you haven't been), and even nipped into the garden centre so that I could look at some plants ("That's me saying Yes to you, so you can have some fun on Yes Day too," she told me).

Later, at home, they both wanted to help me cook dinner – and much as I knew it would take longer and turn out messier, I said yes, and actually, in the end, we had the best fun in the kitchen that day. "Can we bake something?" my youngest wanted to know after, and even though at this stage, I had just gotten the dinner prep cleaned up, I said yes, and chocolate chip cookies were made.

"Mam, can you build a Titanic boat with me?" My 4-year-old, dragging our entire Lego box behind him. Sure.

"Can we sleep in the teepee (we have a play teepee in the living room)?" they both wanted to know when it was time for bed. "Will you read a whole book and snuggle in the teepee?" Sure. "Can we eat our cookies while watching a Barbie movie?" Yep – even though it was now almost pushing bedtime.

stayed in pj’s and camped out here (with L) for most of the day ?#winning 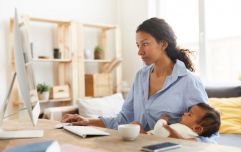 END_OF_DOCUMENT_TOKEN_TO_BE_REPLACED

Finally, after a whole book (+ another shorter one that my 4-year-old suddenly remembered he loved), and some snuggles and a change of pyjamas (again my 4-year-old, who suddenly remembered he wanted to sleep in his Brazil football outfit, not the M&S pj's I had put him in), they were asleep. And I could sink into the sofa with a cup of green tea and binge-watch a few Grace & Frankie episodes on Netflix just to try and process this very different day.

I think what stood out to me the most is this: What my children actually wanted the most (apart from the treats, which, in fairness, was a big part of our Yes Day), was my time. Quite simply: They wanted me to put down what I was doing and watch a movie with them (without getting up to empty the dishwasher or answer my phone when it beeped). They wanted to play games with me and read with me and bake with me and pretty much have my undivided attention for a day.

And while I like to think that I am pretty good at giving them this on other, normal days too, maybe it is the case of so often having to say 'no' or 'wait a minute' because I am also busy with cooking or cleaning or laundry folding, or just distracted by work e-mails or chores or other things.

she is my favourite girl in the world ?#nahla

On Yes Day, however, once they asked for my time, everything else got dropped and it was game on. And they loved it. I realise that living every day like it was Yes Day would no doubt result in chaos and cavities (seriously, the sweets), this day did help remind me that sometimes, schedules and chores and being in control can take the back-seat – everything isn't going to come crashing down because of it.

Did I feel slightly uneasy about all the crap they ate? Sure. But I am also clever enough to realise that one day of eating treats and junk food in between a whole lot of days, most days, in fact, of eating good, healthy, wholesome food isn't going to do any harm.

The same goes for plans and schedules and laundry – sometimes just walking away and ignoring it for a bit is a great thing – and won't do any harm in the long run.

Was it fun? Yes – although a little exhausting too, to be honest. Will we be doing it again? For sure – but not for a while. A good, reasonable long while, obvs.


popular
Here's what bookies think Harry and Meghan will name their baby girl
10 rare Irish baby names not too many parents are using these days
Katie Holmes shares rare photo of daughter Suri to mark her 15th birthday
Mother wants to exhume daughters body from her grave in Cork
Maternity hospitals can now begin to ease visitor restrictions says HSE director
WATCH: The trailer for the new Sophie Toscan du Plantier documentary is here
"To all my friends with babies, I apologise."

You may also like
2 days ago
Mum confession: My little boy would never listen to me – until I tried something new
2 days ago
Crafty mum makes 'edible' sandpit for her baby by putting Cheerios in a blender
3 days ago
Don't worry – being a 'good enough' parent is actually good enough
3 days ago
12 things all kids should be able to do by the time they are 12
3 days ago
One mum nails why ALL companies should be trying to recruit mothers to their workforce
3 weeks ago
Fun at home: 3 easy Easter-themed activties to take on with your little ones
Next Page