"I didn't sleep for a minute that night."

A mum whose son was diagnosed with a dangerous respiratory illness has shared an important warning about kissing newborns.

Kelli Beachwear turned to Facebook to urge other parents to be aware of the risks of respiratory syncytial virus (RSV), a common respiratory virus that can cause cold-like symptoms.

The HSE says that while it affects most children at some point in the first two years of their life, it is particularly dangerous for infants.

She began the post by explaining that before he was born, they had their minds set "on absolutely no kisses" - however, she notes, that "somehow it happened".

"When Colton was 6 days old, I walked up to him when he was napping and found his top lip was blue and that he wasn't responding.

"I picked him up so fast that it startled him and he thankfully started crying. Dalton and I took him in and after some testing was done we were told Colton was positive for RSV, that in the morning he needed to go to the Respiratory clinic.

"I didn't sleep for a minute that night. I don't even think I blinked as I stared at him all night praying that he had the strength, while we sat in the bathroom with steam from a hot shower to help him breathe."

Things took a turn for the worst when the concerned parents rushed little Colton to the respiratory clinic the next day.

"There we were told his oxygen saturation was so low they not only couldn't release him, but we immediately had to sign paper work for our 7 day old to be transported by ambulance on oxygen to be admitted at the other location.

"Doctors were already prepping him for the incubator before I even could comprehend what was being said. We had to watch our son be hooked to a machine to get the oxygen his little body needed. He was diagnosed with RSV and bronchiolitis.

"The doctors made it a point to be encouraging through our stay, but at the same time were very clear of the danger of RSV and bronchiolitis especially for his age group.

"I'm lucky to say that after 7 long days on 100% oxygen and weeks of recovery, he pushed through. But many don't." 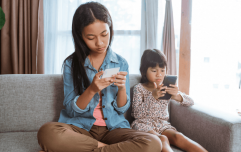 END_OF_DOCUMENT_TOKEN_TO_BE_REPLACED

She explained that while Colton has now been discharged from the hospital, he is more susceptible to respiratory illnesses due to the diagnosis.

He has also been prescribed a nebulizer to help him breathe due to possible asthma - although she notes that he has still too young for a complete diagnosis.

Kelli added that while Colton has beaten RSV, it's still having an impact on his life as it put a huge strain on him.

She ended the post with a warning to other parents, as well as people who are visiting loved ones with newborns:

"Overall - just don't be that person. Don't be the reason a mom and dad have to prepare for the worst.

"Don't put your want to see/kiss the baby before the well being of that precious baby.

"And don't guilt trip new parents if they wish to protect their baby a little extra. Being able to visit a newborn is a privilege, not a right. Your love from a distance is still felt, I promise."

popular
Having an Elf on the Shelf can actually be bad for your kids
Downton Abbey's Jessica Brown Findlay welcomes twins after IVF struggle
Mysterious clumps in Christmas tree should be removed immediately
Elf on the Shelf is actually pretty bad for your kids, according to an expert
Irish dad shares warning after his 12-week-old baby was hospitalised with RSV
Irish company create app that will send your kids messages from an Elf
Kelsey Parker speaks out about her first Christmas without Tom
You may also like
2 months ago
'Don't do it if you are a parent' – paediatrician warns against viral organising hack
2 months ago
TV presenter praises royal children – and claims most parents today are raising 'spoiled brats'
2 months ago
"Home alone" – hilarious Prince Louis memes are taking over the internet
2 months ago
Waitress admits to watering down kids' sugary drinks without telling parents
2 months ago
Dad's trick for getting his son to take medicine causes major parenting debate
2 months ago
A stranger wanted to change my baby's nappy and called me “a pervert” when I refused
Next Page