We need to stop praising dads for simply being a parent, and here is why

A close friend of mine is a dad-of-three – and both himself and his wife have busy jobs that they love and feel passionate about – and both involve a bit of travel.

My friend's wife is constantly asked how she does it all, how she juggles the travel with having three young children, and people have even asked her does she not feel sad she is 'missing out on so much of her children's lives' when she is away with work.

Guess what? No-one has ever asked my friend this – despite him being a dad to three young children, in just the same way his wife is a mum of young children.

No-one has ever said to him does he feel sad for working, or asked him how he 'juggles it all.' Not once.

Recently, actress Keira Knightlyspoke out about the same issue – you know, the fact that dads aren't babysitters or helpers, but parents a par with mothers.

In a new interview with HelloGiggles, Knightly points out how fathers tend to get a lot more credit than mums do when it comes to basic parenting tasks.

"It's really rare to see a guy at a children's [daycare], and if he is, people say, 'Ooh what a lovely dad. Look at him looking after his own children,'" Knightley told HelloGiggles. "You would never say that to a woman." 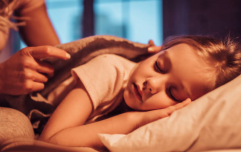 END_OF_DOCUMENT_TOKEN_TO_BE_REPLACED

Isn't so true, though? Society seems to see dads as some kind of heroes for performing regular parenting tasks – with mums not getting any reckognition for doing the absolute lion's share of parenting.

Knightly, who shares her one and five-year-old daughters with husband James Righton wants people to stop praising dads for the basics and start expecting them to be parents. She says the conversation about working mom guilt needs to be redirected, because most fathers work, too—and nobody's asking them if they feel guilty about it.

You may also like
12 hours ago
Mums are more stressed at home than in work, researchers find
13 hours ago
Quality time: 10 easy autumn-themed crafts to do with your kids this midterm
1 day ago
Kids always playing rough and wild? Here's the ONE trick you need up your sleeve
1 day ago
One mum's chore chart for her kids is being praised as 'life changing' by other parents
1 day ago
Eva Mendes has some thoughts on parenting through a goddamn pandemic
2 days ago
10 extremely annoying things people need to stop saying to new mums
Next Page