Are we concentrating too much on being friends with our children?

My children are still young enough to think I am the absolute coolest and most amazing person in their universe.

Which is, of course, the most fantastic and confidence boosting feeling.

Because, while I'm clearly their parent and the one to point out both bedtimes and the fact that no, we can't have Nutella at every meal, I have yet to say no to something that truly enraged them. Yet.

I am sure the day will come when I will become the single most hated person in our household. The one who has just denied them fun times with their friends and told them homework comes first, or informed them that no, they are not allowed to backpack around Thailand with their slightly creepy looking friend, or, you know, holding their tablets hostage because I feel like people should talk, not message, over dinner.

But for now, I am soaking up my popularity. Big time.

Those of you with kids who have reached that age where they turn on you, though, might find Kristina Kuzmic now-viral video just as hilarious as we did. In the video, the mum-of-three explains, through mouthfuls of ice cream and Merlot, why she is not befriending her children anytime soon:

The video titled, “I’m Not Your Friend, Kid! Because I Love You,” explains that parents should not count their children on their list of besties. She starts off the video by stating, “All three of my kids are mad at me right now, and you know what? I don’t care. For those of you who struggle with math that means that 100 percent of my children are angry with me right now.” 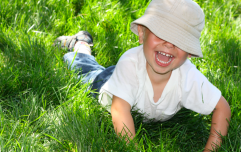 END_OF_DOCUMENT_TOKEN_TO_BE_REPLACED

Kuzmic believes it is the job of parents to raise their children into decent human beings who you would “actually like to hang out with someday.” To achieve this, she explains, parents should set boundaries and not give in to every little whim a child desires.

Growing up, my parents were definitively my parents, much as I have always been (and am still) extremely close to both of them. But they were always strict when it came to certain things, and as an adult, I am grateful for that. Massively.

And now, as a parent myself, I realise that there must have been times where they could have said yes to things and taken the easy way out, not having to deal with the screaming and anger and teenage drama that followed my sister and me being denied something we wanted. But they didn't cave. And they were right.

It is the role of parents to teach our children about life and about behaving and disappointment and right and wrong. Always allowing them to have their way cannot make a good adult, and it is our very important job to prepare them for a world where they are not the absolute epicentre.

When those years come, I will be ready. I hope.