No, seriously. The older I get, the more women and mothers I meet, the more I realise just how powerful, amazing and strong women really are.

Just think about our bodies – how incredible they are – being able to grow and birth an actual human.

But while our bodies may be built for birth, and this mantra has helped many a women through labour, maybe making it sound too easy takes away a little from how incredibly a job giving birth really is?

Because yes, birth is natural and normal, but it is also really, really hard on us. And the fact is that society needs to acknowledge that so mothers can get the support and time they need to heal.

In fact, science suggests that giving birth is harder on a person's body than running a marathon, and while athletes are resting and getting treatment for their injuries, too many mothers are trying to walk theirs off.

In a lot of ways, running a marathon and giving birth are very similar experiences. Researchers note that in both cases, we often forget how painful the event actually was, and in both cases our bodies are pushed to extremes.

But, as Mother.ly put it: Runners step up to the starting line well rested. When women step into the birthing suite, they're already exhausted.

According to Holly Dunsworth, an associate professor of anthropology at of the University of Rhode Island, mothers in the last weeks and months of pregnancy are "pushing right against the possible sustainable metabolic rates in humans." 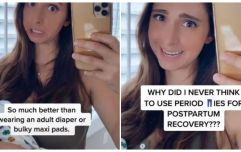 END_OF_DOCUMENT_TOKEN_TO_BE_REPLACED

"We max out toward the end of pregnancy," Dunsworth told the BBC. "Those last weeks and months of pregnancy are tiring." We are starting our race feeling as depleted as runners feel when theirs is over.

And when runners get hurt, they get help.

A 2015 study out of the University of Michigan found that as many as 25 percent of postpartum mothers have "fluid in the pubic bone marrow or sustained fractures similar to a sports-related stress fracture." Two-thirds of the women had injuries similar to a severe muscle strain. The research suggests up to 15 percent of mums sustain pelvic injuries that don't heal, and we're just walking around with them.

According to Janis Miller, the lead author on the study, when an athlete gets one of the these injuries, they end up in an MRI machine getting checked out. When a postpartum mum has the same issue, it's downplayed and often undiagnosed. This leaves women confused and concerned about their symptoms, and unchecked physical problems can put a strain on maternal mental health.

"We have this thing where we tell women, 'Well, you're six weeks postpartum and now we don't need to see you—you'll be fine.' But not all women feel fine after six weeks, and they aren't crazy," Miller said in a media release.


popular
Irish mam creates dating app for single parents often disadvantaged on other apps
Meath teenager saves family from blaze that destroyed their home
These are the counties most likely to have a White Christmas this year
A documentary about Amber Heard and Johnny Depp is coming soon
Former Queen member Brian May proves he's the best Grandad in heartwarming post
This is what's really happening during each trimester of pregnancy
Mum drove home drunk with her 4 and 6-year-old children in the car
You may also like
3 days ago
Irish woman gives birth to baby in taxi while on holidays in Lanzarote
3 weeks ago
Mum gives birth to 14lbs 15oz baby believed to be UK's 3rd biggest on record
1 month ago
Big bundle of joy: woman gives birth to baby weighing over 14lbs
1 month ago
Midwife says making women give birth on their backs is "putting them through torture"
1 month ago
Babies born in October are pretty special – and science even says so
2 months ago
Husband wants wife to have C-section instead of vaginal delivery to 'not ruin their sex life'
Next Page