Is This Wedding RSVP Card Rude or Funny?

This wedding RSVP card is causing a bit of debate online.

According to reports, a Times Union staff member recently received a wedding invitation in the post along with the RSVP card below.

While the invitation itself was described as being traditional, there is some debate over whether the RSVP response leans more towards rude or funny.

That's because the first option for attendance is defined by the phrase "Free booze? Yes please!" whilst the decline option asks guests to "insert lame excuse." 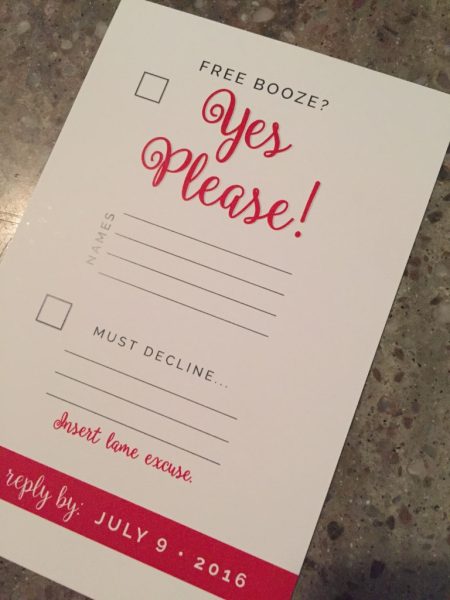 
popular
Safety expert warns against leaving kids’ bedroom doors ajar at night
As of today, every hospital in Ireland will have the same rules for partners attending maternity services
Newborn needs 13 stitches on her face after being "sliced" during emergency C-section
2-year-old boy hospitalised after swallowing 16 magnets from a toy
Are you a “petty feminist b*tch” if you don’t take your partner’s second name?
These 5 foods could increase your chances of having twins
Why this year’s school report cards should just say ‘you did your best’
You may also like
4 months ago
Getting married? Aldi has just launched the ultimate €5,500 wedding giveaway
9 months ago
All wedding guests must be gone by 11.30pm in accordance with new guidelines
1 year ago
Number of guests allowed at weddings from July likely to be "very small" says Simon Harris
1 year ago
Brides-to-be! The genius tip that can save you a significant amount of cash on your wedding day
1 year ago
Bride asks bridesmaid to dye her hair for the wedding to avoid clashing with the "colour scheme"
1 year ago
The stunning wedding dress trend you're going to see a lot of in 2020
Next Page