Penneys has launched a new Baby Yoda collection - and not going to lie, we want it

When Baby Yoda hit our screens, many a meme was born.

At the end of last year, Baby Yoda became an Internet sensation. He kinda popped up out of nowhere but all the gifs and memes made him instantly recognisable - and hilarious.

So much so, that in the beginning nobody really knew where Baby Yoda came from.

It turns out that he's from the new Disney+ show, Star Wars: The Mandalorian (and yes, we want to start watching the show now, too).

It turns out Baby Yoda is actually 50-years-old in the series, but he's only at the beginning of his 900-year lifespan which explains why he's so childish-looking.

If you love your Baby Yoda memes then you're in luck because Penneys has just launched a collection. The unlucky news, though? It's seems to be only for kids. 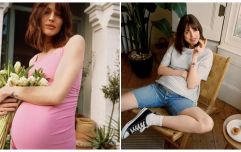 Penneys' new maternity range is both practical and on-trend – and so, so cute

END_OF_DOCUMENT_TOKEN_TO_BE_REPLACED

The retailer's Instagram page shared a photo of two new tops including the galactical creature, with one featuring a lone picture of Yoda and the second featuring a picture along with the writing "The force is strong with this child."

The t-shirts are unisex so if you have a son, daughter, niece, nephew, sister, brother or random kid around the block that would like one, you can buy them in Penneys stores nationwide.

The t-shirts come in at €7 which is pretty affordable... and we're not going to lie, we might even try squeeze into one ourselves.

popular
Expert says Cocomelon acts "as a drug" to kids' brains
Adam Collard responds to claims he cheated on Paige Thorne
Sarah Millican said this gross thing means you love your mum and I want to know if it's true
10 construction-themed birthday cakes your kids will DIG
Smyths issues warning to parents ahead of Christmas
Coronation Street star Lucy Fallon pregnant after miscarriage heartache
"It took me by surprise": Holly Willoughby gets honest about her 14 year marriage
You may also like
4 days ago
Penneys recalls children's plate over chemical contamination concerns
2 weeks ago
Penneys launches a menopause range of nightwear and underwear
1 month ago
Here's where you can get the best deals on all your Back to School essentials
1 month ago
Penneys to freeze prices on kids' clothes to help struggling families
3 months ago
Primark is trialling online orders for the very first time
4 months ago
Stacey Solomon releases yet another adorable kidswear collection with Penneys
Next Page