We love a good bargain.

As much as we would love to spend all of our money on clothes, bags and shoes, there are a few little things called food and kids that we *have* to put our cash towards.

Which leaves us with not enough spare change to splash out on anything majorly expensive.

That's why when a high street stores releases a dupe of our favourite designer pieces, we absolutely jump at them.

Penneys is great for doing a designer dupe and the latest one is a bag that looks pretty similar to an expensive Chloé one.

And here is the Penneys version:

With similar detailing and colouring it's the next best thing to have if you don't want to spend most of your wages. 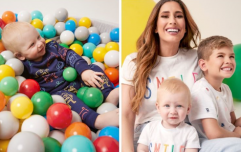 END_OF_DOCUMENT_TOKEN_TO_BE_REPLACED

The black Gucci bag that everyone is going mad for is a bit more streamlined than the Penneys version (obvs), but they're pretty similar - Penneys even has a dupe of the Gucci logo on the front of its bag.

And here's the Penneys version for €10.

While the high street one is quilted, and not as OTT as the designer version, you really can't go wrong for a tenner.

You can find the Penneys bag in stores nationwide.


popular
Answer our short survey for a chance to WIN a stay for two at the Dingle Skellig Hotel in Kerry
These 5 Foods Could Increase Your Chances of Having Twins
Getting Outdoors: 8 Of The Best Waterparks Around Ireland
Gardaí seeking the public's help in finding teen missing since last week
Rupert Young, twin brother of Will Young, passes away, aged 41
Dear mum who can't imagine leaving her child in a crèche
Italian children don't have bedtimes and it could actually be a good thing
You may also like
1 week ago
Spotted at Penneys: Two cruelty-free dupes for popular makeup brands
1 month ago
Thanks, Penneys: Significant queues as stores reopen nationwide
1 month ago
BREAKING: Penneys confirm they WILL reopen ALL stores across Ireland within a week
3 months ago
Thanks from Penneys: the high street store is delivering thousands of care packs to frontline workers
4 months ago
Due to Covid-19, Penneys stores across Ireland have closed until further notice
4 months ago
Say hello to the €18 Penneys dress you're going to want in your spring wardrobe
Next Page