Plastic is a problem.

We are all aware now that plastic (and the chemicals in it) pose a major problem to not only the health of our planet, but also to our individual health.

There is growing evidence that humans consume huge numbers of tiny plastic particles, formed when larger pieces of plastic break down, but very little is known about the knock-on health consequences.

And now some Irish researchers have discovered that the problem begins in infancy – at least for babies who are bottle-fed.

According to a new study, bottle-fed babies may ingest more than one million pieces of microplastics each day.

The authors of the research, published in the Nature Food journal, looked at the rate of microplastic released in 10 types of baby bottles or accessories made from polypropylene, the most commonly used plastic for food containers.

When looking at the data, the researchers at Trinity College followed guidelines from the World Health Organization on sterilisation and formula preparation conditions, meaning they prepared the bottles of formula the way it is generally advised and understood it should be done.

Concluding, the study authors said that sterilisation and exposure to high water temperatures had the biggest effect on microplastic release, going from 0.6 million particles per litre on average at 25C to 55 million/litre at 95C. 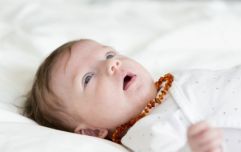 Does your baby wear a teething necklace? Here is why you should rethink that

END_OF_DOCUMENT_TOKEN_TO_BE_REPLACED

The authors told AFP that the aim of the research was “not to worry parents” about the potential health risks of bottle microplastics.

“We have communicated, as strongly as we can, that we do not know the potential health risks of infant ingestions of microplastics,” said the Trinity College research team.

“This is an area of research we are now actively pursuing.”

Naturally, low breastfeeding rates will mean more babies are bottle fed, leading the researchers to conclude that it it was in developed nations that babies were likely ingesting the most plastic – 2.3 million particles daily in North America and 2.6 million in Europe.


popular
Anna Daly launches her cosy chic lifestyle brand, Little Bliss
Graham Norton launches new fizzy rosé just in time for festive season
The beautiful poem that sums up how all brand new mums are feeling right now
The Best Homemade Mincemeat Recipe (You'll Never Buy Supermarket Mince Pies Again)
20 Unisex Irish Baby Names That Are Absolutely Magical
Here's everything we know about the Call the Midwife Christmas special
Adam King is going to be on the Late Late Show tomorrow night
You may also like
5 days ago
Dad comes up with clever trick for helping his teen get out of uncomfortable situations
1 week ago
Children under two who are given antibiotics more likely to develop asthma and other illnesses
1 week ago
The ONE very common food that actually poses a bigger choking hazard to kids than grapes
1 week ago
Children who get more hugs have bigger brains, a study has found
2 weeks ago
Thousands of Irish children have missed out on developmental checks
2 weeks ago
This is why maternal grandmothers are especially important to children
Next Page