I remember the day we brought our first baby home from the hospital, and my then boyfriend, now husband, looked at me as we were leaving and asked: "Can we just take her and go..?"

However, there were also times when I did feel a little lost. And this is despite having my mum there for a lot of the time, my pedriatric nurse best friend on the other end of the phone and a loving partner by my side. I mean; there were so many questions, so many things I didn't know if I was doing right. Nigths when I struggled to settle her that felt like eternity, cries that I didn't understand, boobs that ached, babygros that I was afraid to pull over her head in case her neck broke...

I was, like every new mum, tired and bewildered, and exhausted, and, at times, rather lonely.

And much I was count myself lucky for the amazing healthcare system in Norway, where I gave birth, and my husband and family, and look back at these post-partum days with mostly warm and lovely feelings, I still remember those nights when it also felt like I was slowly going crazy – I think we all have those.

Which is why, when I came across a recent Facebook post by Canadian mum Anneliese Lawton, it made me remember the rollercoaster of emotions that those first few weeks of motherhood really is. 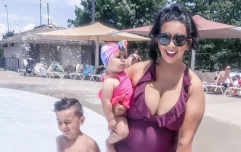 END_OF_DOCUMENT_TOKEN_TO_BE_REPLACED

So if you know someone who has just brough their baby home from the hospital – show her some extra care. Send a text and ask if she needs anything. Bring food and coffee. Offer to help out with older kids or pets. Bring her some new pj's and cozy silppers. Whatever it takes – just make sure she feels cared for. New mums deserve more of that.


popular
'Soak it all in' – the words about parenting that will make you embrace even the hard days
Secondary infertility: The little-known issues surrounding the inability to conceive again
Bedtime confession: I lie down with my children until they fall asleep - every night
H&M to close 170 stores this year due to dropping sales
Rochelle Humes just shared a hilarious update on her pregnancy and I can relate
Doctors were shocked to find baby boy born clutching his mum's contraceptive coil in his hand
11 seriously fun playgrounds in Dublin to bring the kids to this long weekend

You may also like
4 days ago
The new Covid-19 tracker app is live - here's how to use it
1 week ago
"I never thought it would be cancer": Stage 4 melanoma patient recalls receiving her diagnosis
1 week ago
Toddlers are happier with fewer toys, study finds
1 week ago
'Tasting Trays' might just be the perfect solution if you're dealing with a picky eater
1 week ago
Reese Witherspoon drinks the same smoothie every single morning – and here's why
2 weeks ago
The very simple trick that'll get your child to eat broccoli (and other green foods)
Next Page