Perfect for pups who don't like to get wet.

A Dublin entrepreneur has been overwhelmed by the success of his latest business venture - pet umbrellas.

29-year-old Glenn Doyle has delighted dog lovers, who are now able to eliminate the smell of wet dog with this handy product - which can be attached to the leads of smalls pets to keep them dry on rainy days.

How Glenn came to start selling pet umbrellas is an unexpected and funny story.

Glenn works with The Green Felts, a company that runs poker tournaments all over the world. His work came to a standstill when the pandemic hit, so the company turned to golf instead as it was one of the only sports that could still be played under COVID regulations.

"The golf tournaments started to go well so we decided to bring in some branded merchandise to hopefully gain some awareness for our tournaments," he says.

"We got the usual golf-related merchandise like umbrellas, jackets, hats, and other smaller golf tools.

One day while speaking to our umbrella supplier, they suggested we have a look at another style product they do to see if we would be interested.  After listening to what they were saying, I started doing my research. It turned out this product was our pet umbrellas!" 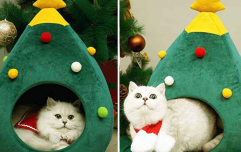 You can now buy a Christmas tree bed for your pet

END_OF_DOCUMENT_TOKEN_TO_BE_REPLACED

Glenn quickly began researching the level of interest for the product in Ireland.

"I found out that none of the pet shops I went to sold them, so I thought it was a niche in the market. We tested the waters and brought in 50 of these umbrellas. They sold in no time."

After selling the initial batch, Glenn took in 250 more umbrellas. Meanwhile, the product gained quite a bit of media attention, which boosted sales even more.

"Well, the level of interest went to a whole other level. Now people of all different backgrounds and different ages want them, which is fantastic. They are selling very well and we hope to take this product abroad in the near future."

Glenn says he laughed when he brought the items to his box producer, who mistook them for faulty communion umbrellas that had accidentally been made upside-down. But as comical and cute as they may seem, they are pretty efficient.

"The item is all one piece. They work in a very similar way to a human umbrella. The canopy can be opened very quickly while the person is holding the umbrella," he says.

With the enormous success of the product, Glenn now has a few more ideas for the future.

You heard him! Be sure keep your eyes peeled for what the company might have in store here.


popular
My sister wants to marry our dead sister's husband- how could she do this?
You can now stay in the house from Home Alone
"He's in a terrible state": Kate Garraway shares heartbreaking update on husband Derek
12 Elf on the Shelf ideas that your child is bound to love
"I made it": Vicky Phelan shares uplifting update after special night out
Nearly there now: 10 easy – but fun – Elf on the Shelf ideas for the last few days
12 Refreshing Baby Names Inspired By Your Favourite Alcoholic Beverages
You may also like
2 weeks ago
An adorable kitten that was born with four ears has gone viral
3 weeks ago
Pet dog catches Covid from its owner for first time in UK
1 month ago
15 paw-some gifts from Penneys for your four-legged friends this Christmas
1 month ago
We asked an expert how to ensure our cats and dogs aren't spooked, this Halloween
3 months ago
Psychologists say we need to be more understanding when people lose a pet
3 months ago
You can now get a bespoke house for your dog made to look exactly like yours
Next Page