We cannot wait to watch this.

Adam King, the Late, Late Toy Show star who captured the nation's hearts last Christmas, has had a busy few months as work gets underway on his very own animated series, Adam

The pre-school show is a comedy-adventure series, which has an environmental slant. Crucially, it spreads a message that is close to Adam's heart - the importance of empathy and friendship.

The series is currently being pitched by Adam's dad David and Kavaleer Productions to potential broadcasters and investors at the prestigious Cartoon Forum event in Toulouse.

The series features the voice of Adam himself, and is the first Irish children's programme to feature a wheelchair-user as its protagonist. 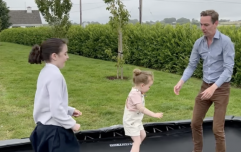 END_OF_DOCUMENT_TOKEN_TO_BE_REPLACED

Speaking at the forum, David King said: "I am so excited to represent Adam and our family at Cartoon Forum. This is the culmination of many months of effort, vision and love from everyone involved. We have been totally blown away by the impact of Adam’s message on people around the world. We are thrilled to capture Adam’s spirit, his love of space and adventure in this wonderful cartoon."

He continued: "As parents, Fiona and I want our children to grow up as the heroes in their own stories. What they see around them inspires, and in Adam’s case - representation really matters. We are so grateful to Kavaleer for their trust in choosing Adam, a wheelchair user, to be the hero in this story. If he can see it, he can be it."

Dr. Norah Patten, a Global Faculty Member of the International Space University, made a cameo during the pitch and said: "Adam has captured people’s hearts from all over the globe. Superstar Astronauts such as Chris Hadfield, Cady Coleman and Dan Tani have all reached out to Adam and supported his quest to become a CAPCOM so I think for all of these young kids watching Adam on screen as the lead character in this cartoon, they’ll see an adventurous, very inspiring young boy and somebody who represents ambition and dreams which will have a very positive impact for and of the kids watching."


popular
14-year-old boy drowns at hotel in Turkey after family wedding
Should schools consider introducing a three-day week?
Body of woman discovered in unexplained circumstances
Online health providers could be excluded from free contraception scheme for young women
Baby clothes from Shein and AliExpress have dangerous levels of harmful chemicals
Inside Prince William and Kate's beautiful new home in Windsor
Prince William and Kate's kids won't have a live-in nanny for the first time in their lives