A man has shared a hilarious video of himself "trying" pregnancy and all we can say is, God loves a trier.

TikTok couple Saif and Leigh, who share a joint TikTok account @saifandleigh, uploaded a clip of Saif with a massive pumpkin attached to his stomach as he went about doing some day to day tasks.

"Making my husband do simple tasks with a belly like mine," Leigh wrote.

The clip then shows Saif trying to use a dustpan and brush, shave his legs and even just get out of the bed in the morning and as you can imagine, he struggles to do it all.

Another wrote: "Well this is the best idea ever." 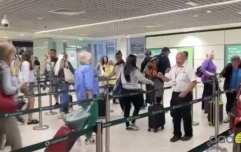 END_OF_DOCUMENT_TOKEN_TO_BE_REPLACED

A third said: "Love that he tried it for a minute."

While a fourth said: "Let's see how the guys feel."

While some made funny remarks, others just tagged their partners obviously getting a little bit of inspiration from the video.

Most people were definitely on Leigh's side, saying men should experience this to understand what women go through, but one commenter was backing Saif, saying: "He's at a disadvantage he looks 11 months pregnant."

popular
Dad asks public to forgive his wife after she killed their three children
Fans believe Molly Mae has called her daughter after a Disney character
Fans call out Jake Paul for insensitive comment on Molly-Mae's baby announcement
Police special operations unit seize mother's e-scooter after she took child to school on it
16-year-old boy appears in court following murder of teenage girl
Molly Mae says becoming a mum is the best thing that ever happened to her
Little boy dies of cancer after doctors ignored mother's concerns six times
You may also like
6 days ago
Not every parent will agree with this mum's stomach bug hack
2 weeks ago
This clever hack could help keep your toddler awake in the car
1 month ago
Little girl heartbroken after only two people show up at her birthday for odd reason
3 months ago
Mum shares important warning after almost losing her newborn to a kiss
3 months ago
'Don't do it if you are a parent' – paediatrician warns against viral organising hack
4 months ago
Should older kids have to babysit younger siblings? One mum weighs in
Next Page