Anything for my little angels...

When the mum who posted this picture of her Christmas tree almost buried under a mountain of presents to her social media feed, she faced a huge backlash.

Mum-of-three Emma Tapping from the Isle of Man posted a picture to her Instagram feed of the teetering pile of presents under her Christmas tree, and was shocked to find that the picture had been screen-grabbed and posted online with the following caption:

"Nearly time for all the materialistic parents to compete and broadcast how many presents their kids have on Facebook! Just remember there are some children' who don't get much." 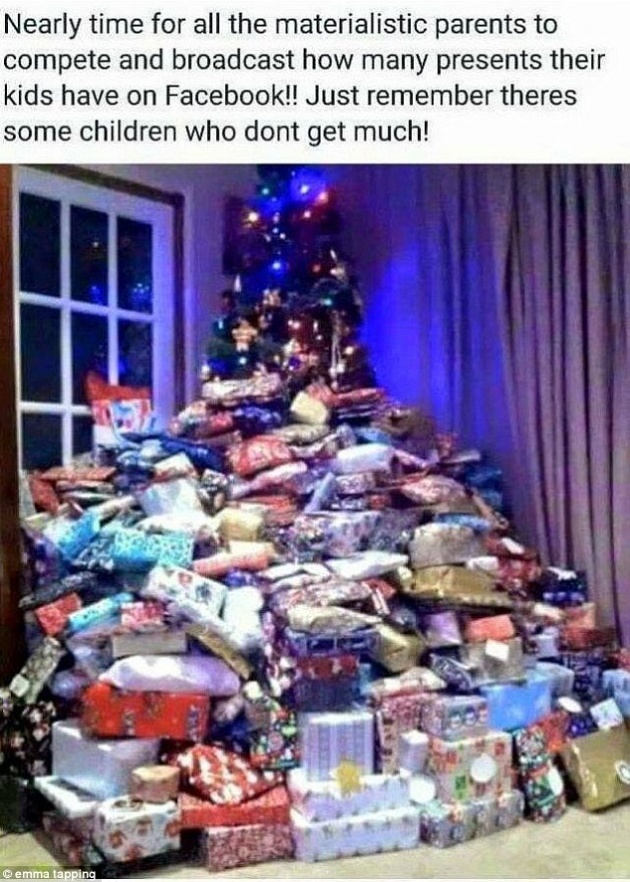 Tapping found herself having to defend buying her three children "up to 85 presents each", explaining that she has every right to indulge her children at Christmas time.

The 27-year-old spends £1,500 on presents for her two daughters, aged 13 and nine, and her 19-month-old son, but insists she is neither rich nor indulgent with them the rest of the year.

"You can buy your children two presents or 200 but it is the way you bring them up," the mother-of-three explains. "They could have two presents and still be a little terror."

On how she accumulates her festive haul, Tapping explains that she starts shopping in the sales in January, and will pick up items throughout the year to wrap up come Christmas time.

"I start shopping in January and use every bargain, every sale I can, that's how I do it, I shop all year round to make the pile as big as it is."

END_OF_DOCUMENT_TOKEN_TO_BE_REPLACED

On why she buys so much, and whether or not it will spoil her kids, she says: "My kids know the difference between right and wrong, they appreciate everything they get and they don't get spoilt throughout the year, we don't go on expensive holidays. If they break something like their phone they have to save up their money to replace it."

The photo sparked massive reaction online, with many condemning the mother for turning Christmas into a game of "present boasting".

"Getting a chid that much stuff is silly. They will have no appreciation for little things in life. Absolute daft" says Twitter-user @Paulkezza<

Others defended Tapping's right to buy whatever she pleases for her own children:

"We should stop comparing ourselves to 1 another & stop shaming each other. Presents or not it's our choice."  Twitter-user @Kelsie_Finn

What do you think? Is this every parent's right, or completely over the top?

It's official: These are the Christmas gifts mams and dads want most


popular
Toddler dies after falling from balcony in New York
Rachel Stevens announces split from husband of 13 years
My teenage step daughter just told me she is pregnant, what do I do?
Two women killed in shark attacks near popular tourist beach in Egypt
I tried 'slow parenting' for a year and I'm never going back
Multiple people killed in Denmark shopping mall shooting
Parent's Benefit Leave extended from today - here's what you need to know

You may also like
1 day ago
The bodies of three missing children and woman found in Minnesota lake
2 days ago
Supermarkets add security tags to baby formula as cost of living crisis deepens
2 days ago
Cost of living: Parents admit to going without meals to feed children
5 days ago
19-year-old in critical condition after severe car accident in Cork
6 days ago
Children wearing wrong-sized shoes and pyjamas in daytime as parents cut costs
1 week ago
Abortions at record high – with cost of living and job insecurity partly to blame
Next Page