"'Strange but true' might not have been the language I would have chosen to introduce this subject."

A summer camp in the US has come under fire for issuing a bizarre letter to parents after children found a decomposing body in the woods.

Three children staying at Camp Lenox in Becket, Massachusetts, found the body whilst out gathering wood with one of their counsellors.

The remains were discovered in a wooded area behind the camp at around 3.30pm.

The staff member and kids involved reported the discovery to camp directors who then contacted the police.

Authorities believe the body was a 35-year-old man whose cause of death is thought to be suicide, according to the Berkshire Eagle.

The body is now in the custody of the state's Office of the Chief Medical Examiner as police further investigate his death. State police spokesman David Procopio told the Eagle that "to date no evidence suggesting foul play has been found."

Camp directors are now under fire for the letter they sent to parents informing them of the incident.

The letter bizarrely buries the lead by initially informing parents of excitement surrounding colour war, "the greatest of all camp events." It then tells parents about the "strange but true event" that saw the three kids, y'know, discover a decomposing body.

"A counsellor and 3 of our oldest campers were in the woods at the border of camp and private property collecting wood for a big event called 'Rope Burn,'" the letter reads, as if the name of the event is of concern. 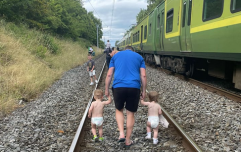 END_OF_DOCUMENT_TOKEN_TO_BE_REPLACED

"As they were collecting wood, they accidentally came upon the remains of a human body that appeared to have died quite a while ago. The boys and staff member came to us, reported what they saw, and we contacted to the local police to investigate this matter.

"Our leadership team and I have counselled and talked with the individuals who were directly involved with this situation and we will continue to monitor them. At this point, they seem emotionally stable and excited to be in colour war."

Eh, great? So glad to know the traumatising discovery of a decomposing body belonging to a man who likely died in tragic circumstances won't interrupt the greatest of camp events.

Excellent use of the positivity sandwich. Camp is buzzing for color war! --> We did find a horribly decomposed dead body --> Get excited for color war!

Did we mention the event they were collecting wood for (when they accidentally stumbled across a very decomposed human body) is called “Rope Burn”?

Glad they emphasized that they accidentally found the body and that it wasn’t on purpose.

What in the name of God were they thinking?

Here's hoping the man's identity can be confirmed for his family's sake and that the children receive appropriate help in processing what they saw.