Students storm out of school after anti-abortion assembly

The students were having none of it.

Hundreds of students at a US high school staged a walkout during an assembly which featured an anti-abortion guest speaker.

One of the pupils took to TikTok to share footage of the incident that occurred in Archbishop Riordan High School in San Francisco, California. The video shows students getting up and leaving in protest, as they walk towards the school's exit.

"My school tried to hold a pro-life assembly, so we walked out," the caption read.

Commenting on the video the creator also said that the guest speaker had "compared Holocaust deaths to abortion." 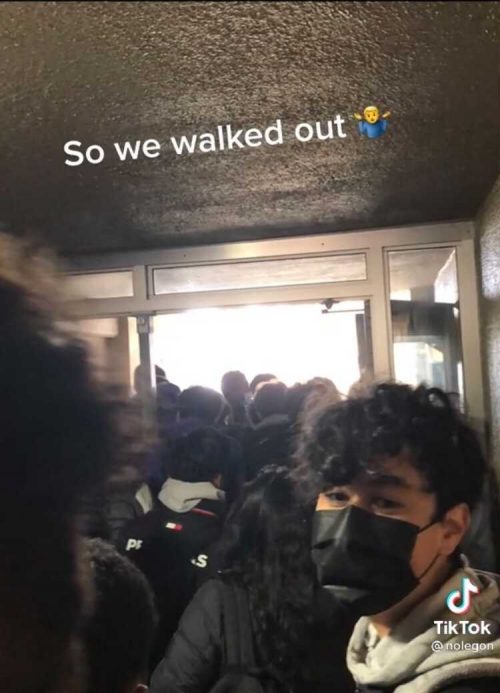 According to The San Francisco Chronicle, the guest speaker was Megan Almon, a prominent pro-life speaker from the Life Training Institute.

According to the Life Training Institute website, Megan works with a programme that teaches others who are opposed to abortion how to "persuasively defend their views in the marketplace of ideas".

The Chronicle reported that five minutes into the speech, hundreds of students at the Catholic high school got up and walked out, leaving only a few dozen pupils remaining in the hall.

The TikTok video received over 2.8 million views on the platform and 721.5k likes.

While opinions were mixed in the comment section, most people praised the teenagers for their walk out.

"Schools shouldn't hold assemblies like this. That isn't their place," one viewer wrote.

"We can't have comprehensive sexual education but we can have anti-abortion assemblies in school. Kayyyy," another said.

"Proud of young people for knowing what they want and not just letting the school brainwash them," a third added.

"As a millennial, I am continually in awe of this generation's dedication to stand up for what's right. Proud of y'all," another person said.


popular
€1,000 bonus will be given to healthcare staff who worked in Covid exposed environments
Antigen tests sold in Dunnes and Lidl recalled over false positives
Gardaí concerned for welfare of missing 14-year-old Dublin girl
5 family members, including parents, sentenced over sexual abuse of children
Woman's suitcase and bank cards stolen as she gives birth in Dublin hospital
Here are the Covid restrictions that may be lifted as early as next week
Expert says Cocomelon acts "as a drug" to kids' brains
You may also like
1 month ago
Huawei Ireland awards €250,000 to fifty Irish STEM students
1 year ago
Tweens and sleep: One extra hour in bed resulted in better grades, study finds
1 year ago
Cork children rapping about climate change becomes a huge hit in America
2 years ago
If you have a child living or studying abroad they will absolutely love this
2 years ago
This teacher gave his students an amazing check-list on how to beat stress
3 years ago
A mental health documentary produced by Cork students airs on RTÉ tonight
Next Page