All we want for Lent is... self-control! Our ongoing fight against sugar

All we want for Lent is... self-control.

Lent is coming and whether you ascribe to its religious foundations or not, it is an inescapable office talking-point. What are you giving up/taking up/making up? These are the questions that you WILL have to answer over the next six weeks.

Still, we’re always ready to get behind a challenge - especially considering it is one that begins with pancakes and ends in an abundance of chocolate.

The old staples of renouncing sugar, crisps, and alcohol are tried, tested and yes, unfortunately frequently failed. What can we say? Forty days is many a long night of abstinence and deprivation.

Indeed, studies have shown that we only have a limited amount of self-control. So when we exercise it all in one area of life - like actually using our gym membership - we then have reduced levels of restraint when the next temptation comes along. Oopsies!

It’s called ego depletion theory... and it makes a lot of sense as to why so many diets, exercise plans, and digital detoxes prove too much for our willpower.

It also explains why when you’re giving one thing up you tend to reach for another vice.

Róisín Hogan, of The Apprentice fame, says when she gave up smoking as a New Year's resolution, she was worried she would end up reaching for unhealthy snacks to sate the nicotine cravings.

Speaking on The Capital B, Róisín Hogan explained: ‘I just didn’t want to put on loads of weight. I would go into a supermarket at 8pm on a Tuesday night and there was nothing there that was healthy, low-calorie and nutritious, and quick.’

Róisín’s quest for the healthy option proved more life-changing than the usual resolution as she started her own business, Hiro By Róisín, a ready-made, low-calorie noodle dish that has kept her busy, healthy and off the cigarettes. 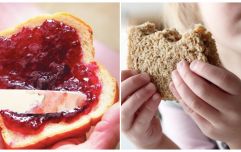 END_OF_DOCUMENT_TOKEN_TO_BE_REPLACED

Realistically not all of us are ready to leap into business, and create a hunger smashing dish, so the next best option?

Our top tip is sipping on diluted apple cider vinegar with a squeeze of lemon, to tame the sugar cravings. It’s a foul tasting concoction but it works to make that bar of chocolate as appealing as cardboard.

Apple cider vinegar, the health hack that just won't go away, has also been proven to work as an energy and blood sugar stabiliser, a digestion booster, an appetite crusher, and a weight loss aid.


popular
Tom Cruise slated for "inappropriate" behaviour around Kate Middleton
Warning issued to dog owners about the "big stretch"
Ryanair passenger refuses to swap seats with mum and baby- was she wrong?
Johnny Depp allegedly threatened to microwave Amber Heard's dog
Teenager dies after hole he digged on the beach collapses
The Toy Show Musical looking for a young girl to star in lead role
Westlife announce special guests for their stadium shows this summer
You may also like
1 week ago
Happiness diet: Seven foods to boost your mood and make you feel better
1 month ago
Mum shares image of sugar content in just one Creme Egg
3 months ago
Stressed? Eating these 3 foods will make you feel calmer in an instant
3 months ago
A primary school has banned meat in lunchboxes and parents are not happy
3 months ago
Fertility superfoods: 10 foods that will balance your hormones, heal your gut and help get you pregnant
3 months ago
Postpartum: 5 things to eat now to help your body heal after pregnancy and birth
Next Page