Some mothers have started sending their children to school with doorstops in their schoolbags.

A selection of parents have decided to include the item in an attempt to protect against school shootings in the US.

The theory is that the doorstop would slow down a shooter from entering a room, giving a child more time to flee or hide.

Connecticut woman, Katie Cornelis, said that she first started sending her nieces to school with doorstops after the Sandy Hook shooting in 2012.

The shooter opened fire on the school and left 20 children between the ages of six and seven-years-old dead.

Cornelis said that she didn't want to scare her nieces, but that she knew the doorstop would give them a chance at safety.

"After the Sandy Hook shooting, I gave both my nieces this little door stop to always keep in their backpacks. It truly pained me when I handed it to them, and I didn’t want to scare them, but it was out of love and they understood.

"II wanted to share this with all parents... and ANYONE else for that matter... to get themselves one (I always carry mine in my purse). Sure it’s small, but it can be powerful in keeping you safe if you ever have to barricade yourself in a room.

"If a gunman shoots out the door lock it will still keep the door from opening and may just buy you some time. I’m really sad posting this but a security expert shared this tip with me so I wanted to pass it on. I pray no one ever has to use it." 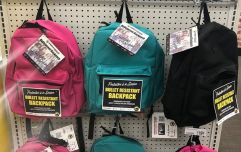 END_OF_DOCUMENT_TOKEN_TO_BE_REPLACED

Although a doorstop is not guaranteed to protect a child against a shooter, it could potentially give them a greater chance of survival if their school came under attack.


popular
The largest family in Britain have just welcomed baby number 22
Stacey Solomon defends choice to let son play outside after receiving nasty messages
Lockdown: my child is upset that he might not get to say goodbye to his teacher
'I’ll let the baby do the talking': Hilaria Baldwin reveals that she is pregnant
Positive parenting: 3 very simple family habits to raise happy, kind and caring children
David Beckham shared his dinner on social media and we really wish he hadn't
Do babies in Ireland still get the BCG vaccine to protect against tuberculosis?
You may also like
2 months ago
Daycare employee writes mum-shaming note in marker on toddler's stomach
2 months ago
Utah Governor has said that he is banning 'gay conversion therapy' for minors
2 months ago
Tennessee has just passed a bill that will prevent same-sex couples adopting
2 months ago
Video shows classmates cheering for 6-year-old boy after he finishes chemo
4 months ago
The #PeppaEffect is very real and parents would like a word with Ms Peppa Pig
4 months ago
Mum sprays breastmilk into a crowd of party goers and other mums aren't happy
Next Page