"You are not and will never be my kids' parent": Katie Price lashes out at Emily Andre

Katie Price has branded her children's stepmother, Emily Andre, a "disgusting person" in a scathing attack on social media.

The reality star took to Instagram Stories on Sunday to share her anger at a magazine interview Emily gave about parenting and the blended family she has with husband Peter Andre, with whom Katie shares two kids.

In the now-deleted Story, the 43-year-old shared part of the magazine cover on which NHS doctor Emily, 32, appears, alongside a lengthy caption.

Katie made a series of jabs and allegations at the stepmother to her children Junior, 16, and Princess, 14, including a claim that Emily stopped Princess from visiting her in rehab.

"My mouth has been shut for so long but I've had enough of people selling stories on me and particularly this so called woman @dr_emily_official who always said I don't want to be famous yet doesn't do too bad to stay away from media and TV and now trying to make a career out of it," Katie wrote.

"So cringe she has used my children to make money in photo shoots yet covers her own children's faces up!"

The mother-of-five then referenced her own stint in rehab at the Priory after she admitted to flipping her uninsured BMW X5 into a hedge while disqualified and under the influence in September.

The former glamour model continued: "She claims to be a doctor who clearly doesn’t have a clue about mental health oh and stopped my daughter from visiting me at the Priory when she wanted to see her mum.

"She is so jealous of my relationship I have with Princess and puts me down."

Katie then addressed Emily directly by writing, "Emily you are not and never will be my kids' parent so mind your own business, [you're] so two faced and definitely not the person you portray to the public.

"I think [you're] a disgusting person so stop trying to interfere in my life." 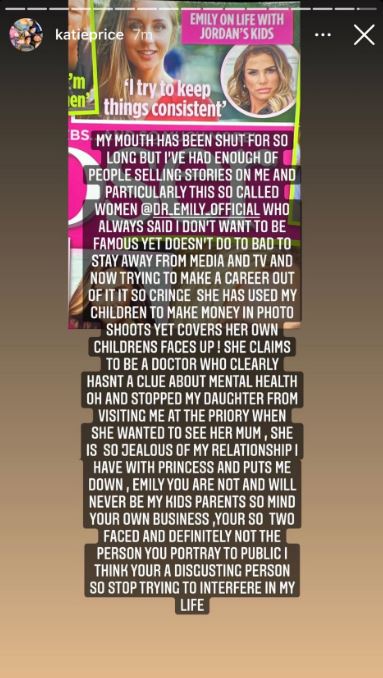 In Emily's magazine interview, which had been with Closer, she said she tries to "keep things consistent" in parenting her and Pete's children as well Princess and Junior.

She added that she prefers to "leave the disciplining" of the teens to Peter so as not to overstep her boundaries as their stepmum and admitted she can feel more "like a big sister" to them.

Katie's response to the interview comes right as it was revealed police would not be launching an appeal to the 16-week suspended sentence and two-year driving ban she was handed over the September car crash.

Police were reportedly "disappointed" to find there was "no legal grounds" to launch an appeal to the sentence, which they felt was too light.

popular
Breaking: Female child found with severe injuries in Co. Clare
Fans defend Khloe Kardashian for posing in hospital bed with her newborn
School threatens to suspend pupils who don't follow "outdated" uniform rules
Shows like Bluey and Peppa Pig are actually bad for kids, expert warns
Vaccine programme to roll out in primary schools
Adam Collard responds to claims he cheated on Paige Thorne
5 not-to-be-missed events and activities for kids taking place in Dublin this autumn
You may also like
8 hours ago
Why Cuba's redefinition of the family is so significant
10 hours ago
Extra child benefit, IVF and free GP care: Key takeaways from Budget 2023
19 hours ago
Son sues parents for throwing out his porn collection... and wins
1 day ago
Budget 2023: Parents will not have to pay for primary school books from next year
3 days ago
Hilaria and Alec Baldwin welcome baby #7 together: 'We are overjoyed'
3 days ago
Gardaí appealing for witnesses following fatal road traffic collision on M7
Next Page