Well, her name is hot-ironed into his chest...

Pete Davidson’s mother seemingly loves the idea of her son having a baby with Kim Kardashian.

Amy Davidson showed her willingness to become a grandmother in replying to a fan comment on Instagram that suggested Kim would be pregnant by the end of the year.

On a photo of Pete, 28, and Kim, 41, kissing in a car, Instagram user @ariana826 tagged the comedian's mam and wrote: “She will be pregnant with his child by the end of the year. [love heart emoji]”

According to Page Six, Amy, who goes by the username @amyymarie118, enthusiastically replied, “yayyyy!”

Whether that'll happen or not can't be predicted, but the couple have definitely gotten serious in the short time they've been together.

In an interview with Ellen earlier this month, Kim gushed over her relationship with the Staten Islander right after making it "Instagram official".

“I have the cutest pictures of us, and I want to be like, ‘Oh my God, we’re so cute,’ but then I’m like, ‘Don’t be so desperate. Don’t be posting so much, just give a glimpse,’” she said, joking that she doesn't "know the rules" as she hasn't dated "since before Instagram existed".

“It feels good. I think it’s just in life, like no matter what it is, I encourage my friends and the people that I love just to be happy, and I went for it,” she continued. 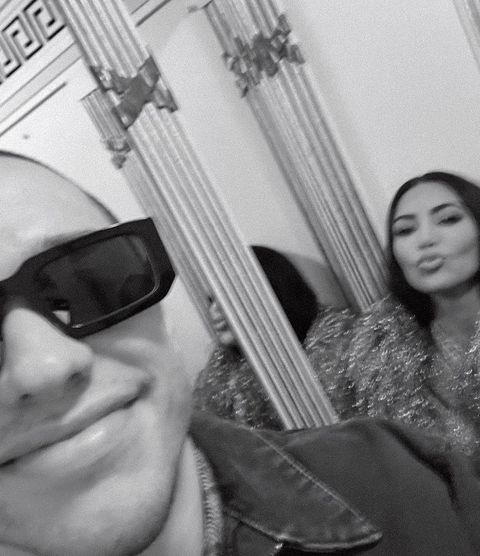 END_OF_DOCUMENT_TOKEN_TO_BE_REPLACED

The reality star went on to describe how Pete has several tattoos for her – including her personal favourite that reads 'my girl is a lawyer' – but shocked Ellen and the audience by revealing he branded her name on his chest.

“It's so cute guys,” she said with a laugh in response to Ellen's stunned expression.