A soon-to-be family of five.

Vogue Williams and Spencer Matthews revealed last month that they were expecting their third child together, and now they've announced the gender of their new arrival.

The happy couple have been keeping fans updated on Vogue's pregnancy journey, they confirmed the pregnancy back in Novemeber, telling fans they were expecting the baby to arrive in April of 2022.

In a new interview with Hello Magazine, the same place the couple initially announced their baby news, the model and her husband revealed they are now expecting another little baby boy join their family.

They already have two kids together, Theodore and Gigi.

"My sister asked Theodore if he wants to have a brother or sister and he replied: 'A brother! I don't want a sister, I already have a sister.' So he's delighted," Vogue explained in the interview.

Speaking to Hello back in November, the couple spoke about how they were excited to have another baby in the family, and how it happened quicker than expected, saying: "I never expected it to happen as easily as it did. We're very lucky."

Vogue went on to reveal that their eldest son Theodore knows that he's getting a new sibling but their daughter Gigi is still too young to understand what is happening. 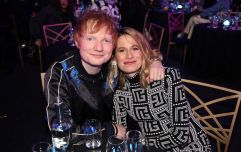 Ed Sheeran and his wife Cherry welcome their second child together

END_OF_DOCUMENT_TOKEN_TO_BE_REPLACED

The couple also joked that keeping the news a secret was harder than they thought, especially when Spencer almost told everyone the news on their podcast.

Thankfully, they managed to edit out the blunder before they were ready to announce the news themselves.

Vogue and Spencer are currently planning a trip to Ireland for Christmas to have their families over for Christmas dinner in their new Howth home if Covid regulations allow them.


popular
Tom Cruise slated for "inappropriate" behaviour around Kate Middleton
What exactly is monkeypox and is it dangerous?
Rihanna fans slam Chris Brown for commenting on her baby news
10 hotels with self catering that are perfect for a family staycation
New mum devastated that her mother-in-law held her baby before she got to
HSE urges public to stop using popular e-cigarette immediately
Ed Sheeran and his wife Cherry welcome their second child together
You may also like
1 day ago
Rihanna has reportedly given birth to her first child
3 days ago
Downton Abbey's Allen Leech reveals second child's gender in the cutest way
5 days ago
"My whole world": Sam Faiers gives birth to her third child
1 week ago
Kelly Osbourne reveals she's pregnant with her first child
2 weeks ago
Brian Dowling and Arthur Gourounlian expecting their first child together
4 weeks ago
Coronation Street's Catherine Tyldesley welcomes her second child
Next Page