Dogs should wear shoes during the heatwave, say police in Switzerland

The heatwave seems to be dying down a bit here in Ireland, and thank god because there was a moment there where we never thought we'd see the rain again.

For many countries though, the hot weather is still very much a thing, leaving grass yellow, skin burnt, and dogs unable to walk around as freely as they used to.

Some of these dogs live in Switzerland and they've been having a hard time placing their little paws on the intense hot ground lately.

So, in order to make things that little bit easier for the little guys, police in Zurich are encouraging people to make their dogs wear shoes. 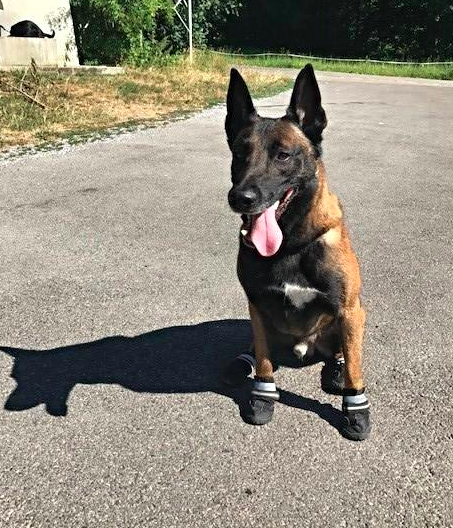 The Zurich City Police service launched their 'Hot Dogs' campaign recently in a bid to make the summer a little more bearable for the boys.

They told people to either carry their small dogs across hot surfaces or give them doggy shoes to wear so they can go around themselves.

"Not everyone is happy about the current hot temperatures. And that also means the best friend of man: the dog.

"We recommend the simple 5-second rule: hands for five seconds on the asphalt - too hot? Then avoid allowing your dog on the asphalt in the sun (...) Or use big dogs 'shoes' and carry smaller dogs!"

We wish all of the dogs involved in this initiative the best of luck.

popular
HSE issues advice for parents if their child starts choking
Love Actually star reveals incredibly emotional behind-the-scenes story
Expert says Cocomelon acts "as a drug" to kids' brains
Regé-Jean Page is officially the most handsome man in the world, according to research
Britney Spears asks fans to respect her privacy after police call to house
Do children belong at weddings? Mum starts heated debate
What is chroming? Mum issues warning after daughter dies from dangerous trend
You may also like
3 weeks ago
Long-lost dog siblings accidentally reunite on Kerry beach on Christmas Day
1 month ago
Watching Bridgerton can help your dog relax, according to science
1 month ago
29 puppies rescued from illegal trafficking at Belfast Port
2 months ago
DSPCA reveals how to keep your pets safe on Halloween
3 months ago
Dogs Trust seek public's help after taking in 54 puppies in 3 weeks
4 months ago
Joey Essex cancels dog adoption after learning about ear-cropping
Next Page