Fair play to the lads.

Rachel Riley and Pasha Kovalev have gotten married on the sly in Vegas.

The Countdown presenter and Strictly dancer tied the knot in a secret ceremony over the weekend, just a few weeks after announcing that they were expecting their first child together.

Riley announced the news on Instagram yesterday, sharing a photo of the pair saying that that they had both "said yes."

"Introducing the new Mr and Mrs Kovalev," she wrote. "We both said yes!"

The couple's friends and family were reportedly unaware that they were planning to get married.

Rachel and Pasha met during the 2013 series of Strictly Come Dancing when they were partnered up together.

Riley announced that she and Kovalev were expecting their first child in May with a photo of herself in the Countdown studio cradling her bump. 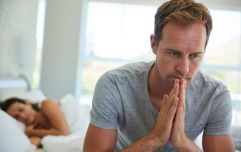 END_OF_DOCUMENT_TOKEN_TO_BE_REPLACED

She posted a photo of herself holding her stomach and standing in front of the Countdown board, with the letters behind her spelling out maternity when they are rearranged.

She captioned the photo: "Pash and I have a conundrum for you...you have 'til December to work it out! We're over the moon excited!

Earlier this year, it was announced that Pasha would be leaving Strictly Come Dancing after "eight fantastic years."

He said in a statement:

"After scoring 93 perfect tens, reaching 4 finals and lifting 1 glitter ball, it's time to find a new challenge and so I've decided to make last year my final season on Strictly.

"I've had  fantastic years, full of wonderful memories, thanks to the incredible partners, professionals and myriad of behind-the-scenes teams who all work to make Strictly the amazing production that it is."

popular
CMO confirms death of child in Ireland from invasive Strep A
Rod Stewart's 11 year old son rushed to hospital after collapsing at football match
Father took daughter to hospital three times before she died of Strep A
Elf on the Shelf is actually pretty bad for your kids, according to an expert
Vogue Williams will be on this week's Late Late Show
This clever trick makes it easy to know if your baby has started teething
Some parents were disturbed to discover that LOL Surprise Dolls have genitals
You may also like
1 year ago
Countdown's Rachel Riley potty trained her daughter at 3 months to save the planet
1 year ago
Rachel Riley announces pregnancy in true Countdown style
2 years ago
Rachel Riley gives birth to first child in bathroom with husband Pasha Kovalev
3 years ago
Rachel Riley and Strictly's Pasha Kovalev expecting first child together
3 years ago
The reason why Strictly Come Dancing's Pasha Kovalev left the show is actually really sad
7 months ago
My 14-year-old stepson has his girlfriend sleep over – and I'm not sure how I feel
Next Page