The rumours continue: Victoria and David Beckham 'are secretly separated'

With their high-flying careers and the demands of four children, Victoria and David Beckham are understandably apart for much of year.

However, some leading publications have recently gone one step further: claiming that their marriage is certainly not as rock-solid as it seems.

Indeed, the Mail On Sunday states that high-profile couple are doing "little to dispel rumours that they are leading increasingly separate lives" citing their new country abode as evidence of said fact.

The Beckhams have purchased a €5.5million rural farmhouse in Oxfordshire and the plans, claims the MOS, show "two distinct living quarters – of equal size – each with their own kitchen, bedrooms and a courtyard".

A source told the publication: "It actually works out well for David, Victoria and the kids. If they are all driving each other mad, they can retreat into these wings like they are living in separate houses." 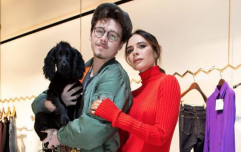 END_OF_DOCUMENT_TOKEN_TO_BE_REPLACED

David and Victoria married in Dublin 18 years ago and have four children aged between 18 and six.

They are widely considered to be one of celebrity's biggest power-couples, and have a net worth of more than half a billion euro.

Here at HerFamily, we're not entirely sure what to make of these latest rumours, but certainly the Beckhams remain one of our favourite celebrity pairings and we wish them all the best.


popular
Toddler dies after falling from balcony in New York
Rachel Stevens announces split from husband of 13 years
My teenage step daughter just told me she is pregnant, what do I do?
Two women killed in shark attacks near popular tourist beach in Egypt
I tried 'slow parenting' for a year and I'm never going back
Multiple people killed in Denmark shopping mall shooting
Parent's Benefit Leave extended from today - here's what you need to know
You may also like
2 months ago
David Beckham sobbed during his speech at son Brooklyn's wedding
3 months ago
Burglar broke into Victoria and David Beckham's home while they slept
3 months ago
Victoria Beckham shuts down claims daughter Harper was drinking wine
1 year ago
Victoria Beckham is every mum trying to get the kids to pose for a Christmas card photo
1 year ago
The Beckhams have just had a BIG couple of weeks – and they are still so, so in love
2 years ago
Victoria Beckham reveals what she eats every day for perfect, flawless skin
Next Page