In December, we'll see the real results of couples stuck at home together during the Coronavirus outbreak

Sure what else would you be doing anyway?

Look, we all stuck at home these days – for God knows who long.

And apart from Netflix, we have no distractions. None. There is no rushing out to work. No book clubs, no gym, no pints with the lads, no nothing.

So what can you do? Well, make babies, it seems.

According to Mother.ly, researchers have previously found a link between being stuck at home with your partner and getting pregnant.

In a US study from 2008, the researchers found that certain kind of catastrophic events—like blackouts and snowstorms—do in fact lead to an increase in conception and subsequent birth rates.

"[The fertility effect] is that with low-level, low severity events, we found an uptick in births...it sets the table for romance," explained head researchers Richard Evans about the findings.

According to an article in NJ.com, very heavy and potentially dangerous storms often result in a baby boom nine months later.

Interestingly, the same goes for events surrounding events like terrorism and other very scary and upsetting events that affect communities and the world at large. 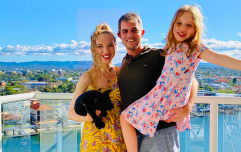 END_OF_DOCUMENT_TOKEN_TO_BE_REPLACED

"A study done in the aftermath of the 1995 Oklahoma City terrorist bombing found an increase in births nine months after the tragedy. Researchers speculated it could have been because people living near the bombing site sensed their own mortality and naturally responded by trying to strengthen their own families."

Here is what midwife, Diana Spalding, had to say to Mother.ly about the possibility of an upcoming baby boom:

"It's probably a few factors: The first being that people who may operate on different schedules, and therefore not see each other as often as they'd like to, are suddenly spending a lot more time together—more time together means more opportunities to make a baby," Spalding explains.

"And the second is that during periods of stress and uncertainty, we tend to seek out comfort and connection with people we love," Spalding says. "One of the many ways to connect with someone is, of course, to have sex with them."

Well, there you go. At least it'll give you something to look forward to, no?


popular
Tom Cruise slated for "inappropriate" behaviour around Kate Middleton
Warning issued to dog owners about the "big stretch"
The Toy Show Musical looking for a young girl to star in lead role
Teenager dies after hole he digged on the beach collapses
2 children hospitalised amid US baby formula shortage
Johnny Depp allegedly threatened to microwave Amber Heard's dog
Rihanna fans slam Chris Brown for commenting on her baby news
You may also like
5 hours ago
'Exclusionary' and 'elitist' – time to end allocations of school places for family connections
2 days ago
An urgent safety recall has been issued for a popular baby teething toy
2 days ago
Gardaí investigating alleged assault on teenage girl in Dublin
3 days ago
Lesbian couple attacked in Dublin thank public for support
4 days ago
Pippa O'Connor shares snaps from son Ollie's extravagant communion
5 days ago
Children's social skills, confidence and speech were severely harmed by lockdowns
Next Page